#MySciComm: Ramesh on learning to do SciComm in graduate school, by going back to middle school

This week, Dr. Ramesh Laungani responds to the #MySciComm questions! 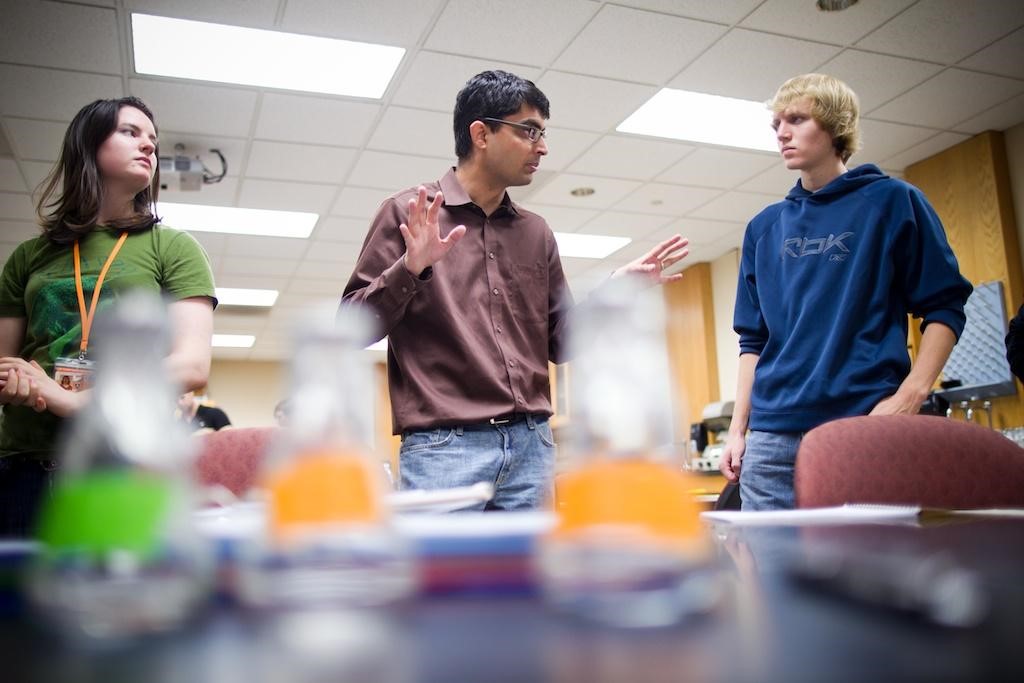 Ramesh is an associate professor of Biology at Doane University. He holds a PhD in biology (ecology and evolution) from the University of Nebraska-Lincoln, where he studied nutrient cycling in tallgrass prairie. As a professor, he teaches both introductory and upper level biology courses. He is also involved in SciComm with K-12 students through tools like Flipgrid and the 1000 STEM Women Project. Connect with Ramesh online @DrRamBio and at his website.

It started in graduate school when I joined Project Fulcrum (PF), a GK-12 program that placed STEM graduate students into K-12 classrooms.

The program goal was to enhance science curricula and interactions between scientists, K-12 teachers, and K-12 students. I was assigned to 6th and 7th grade math and science classrooms in the Lincoln Public School System in Lincoln, NE.

In all honesty, I took the fellowship because I thought it would look good on my CV to have an NSF Fellowship, and it provided funding so I could finish my degree. Little did I know how much this program would transform how I approach my research, my perceptions of my role as a scientist, and my sense of responsibility to communicate science to the public.

PF fellows worked closely with K-12 teachers to design activities that build on key ideas presented in the classroom, while also allowing students to interact with scientists. These interactions helped to build strong relationships between scientists and the K-12 students and the scientists and the teachers. These relationships had the greatest impact on my science communication abilities. We worked closely with “our” teachers to make sure that the ideas we brought to the classroom fit the teacher’s goals. This focus provided great scicomm training – we had to clearly explain how and why our activities addressed the teacher’s learning objective.

Notably, teachers and students were asked by the director of the PF program to refer to us PF fellow(s) in their classroom as their resident scientists. While this guideline helped the students distinguish PF fellows from the student teacher(s) that were also in the classroom, it also helped the students see us as scientists with whom they could interact. By establishing a high level of comfort between students and scientists, we were able to sharpen our scicomm skills by learning to learn from the students. If something we were doing or explaining was working, students would pepper us with a barrage of questions that would extend the activity, or they would get into a friendly competition with their classmates about who could do the activity “better”. Conversely, if something we were doing or explaining was not working, they let us know by disengaging or flat out saying “this is BORING! Why do we have to do this?!”  This real-time feedback was invaluable, not only when we designed activities, but also when explaining the activity/ideas to the students.

From these amazing interactions with K-12 students, I learned how to meet people where they are in terms of scientific understanding while also respecting what they bring to the conversation.

Additionally, every week, PF fellows met as a group to discuss the classroom activities from the previous week and the weekly reflections that we submitted to the program supervisor. We discussed a variety of topics including which activities were effective and ineffective and why, what we learned about teaching at the collegiate level, and what we learned about teaching at the K-12 level. These discussions forced me to dive deeper into my own thoughts on science communication while also providing a venue to hear what other scientists were doing in their classrooms. Not only did I glean new ideas and methods, I sharpened my ability to explain what I achieved in the classroom to a room of scientists from a wide-array of disciplines ranging from math and engineering to meteorology.

From all these parts of PF I learned two rules of SciComm that drive my career today.

Following these simple rules has enabled me to connect with non-science audiences and get more involved in SciComm. I have spearheaded and participated in a number of SciComm activities beyond the borders of Nebraska and my local community. One is the 1000 STEM Women Project.

This Project aims to curate a video library where female scientists record 90-second descriptions, of what type of scientist they are and what they work on, for an audience of middle school students. These videos will be permanently available for ANY classroom to utilize as a resource for students to learn about the various types of science. This project combines digital tools with pedagogical research on students’ ability to identify with scientists.

In addition, I helped organize a large SciComm event in downtown Lincoln, NE called Science Night Live. At our version of SNL, the public interacted with scientists outside of a classroom or lab (and over a beer). We had activities like Scientist Speed Dating, where scientists sat on one side of a table and the public sat on the other. Participants could ask the scientist anything they wanted for 2 minutes before a horn was blown. Then, everyone shuffled down the line to the next scientist. We also had a science-themed improv game show based on “To Tell the Truth.” While playing, members of the public guessed which scientist was telling the truth based on their answers to questions.

In the age of the internet and Twitter, effective science communication is CRITICAL if science is going to be used to help move our society forward. This applies on a variety of fronts, from climate change to biotechnology to human and planetary health. As such, it is just as important to foster science communication skills in the scientific community; a group that often times seems inaccessible to the general public. I believe that following the two rules laid out above can act as a first step towards the development of those skills and can help to break down barriers between the public and science at large. So, if you want some low/no-cost SciComm training, find a middle school classroom (or some middle school-aged students) and figure out how to explain to them what you do!

Flipgrid is a video discussion platform that allows for students and teachers to communicate in an asynchronous manner (opposite of Skype). Last year, I worked with a 6th grade classroom in Rhode Island. I posted a weekly video prompt on Flipgrid, and the students responded with short videos of their own. I replied with another video. Using Flipgrid did not require that I schedule a time to “skype in” to the classroom (which can be logistically challenging), but still allowed the students to connect with me as a person and as a scientist. Due to the success I had with Flipgrid in the 6th grade classroom, I am expanding its use to connect with other classrooms. For example, this fall I am working with a 3rd grade classroom in Manitoba, Canada. Lastly, the 1000 STEM Women Project described above is carried out via Flipgrid.

2. Be a human before you are a scientist.

This rule was really hammered home one particular day in a 6th grade classroom (during PF) when myself and female colleague (also getting her PhD) asked a room of 6th graders if they thought we were scientists. We each stood at the front of the classroom dressed in jeans and a t-shirt, and the students rather quickly said “No, you’re not scientists.” When asked why, they said “You are dressed normal and you don’t have crazy hair.” When we “revealed” that we were in fact scientists, some of the students were a bit dumbstruck. In that moment, I discovered that humanizing scientists could be a path to making science more accessible. I saw how breaking the image of the lab-coat-wearing, crazy-haired, male scientist could impact young scientists and their ability to see a future self in me. To this day, I spend most of my days (in my academic position as a biology professor) in jeans and a t-shirt.

3. Be open and willing to talk about your science through a conversation rather than a one-way lecture.

I use this idea as a filter so that my ideas are engaging, and I push myself to remove as much scientific jargon as I can from the conversation. For example, when the 7th grade students in PF asked what type of scientist I was, I did not say I was an ecologist that studied nitrogen cycling in grasslands. I started by asking them a question: “What do you think a prairie plant needs to grow?” From there, we dove into the ideas of soil resources. As needed, I provided a more complete context for the ideas surrounding grassland nitrogen cycling and plant ecology.