#MySciComm: Priya Shukla on sharing the stories of marginalized scientists

This week, Priya Shukla responds to the #MySciComm questions! 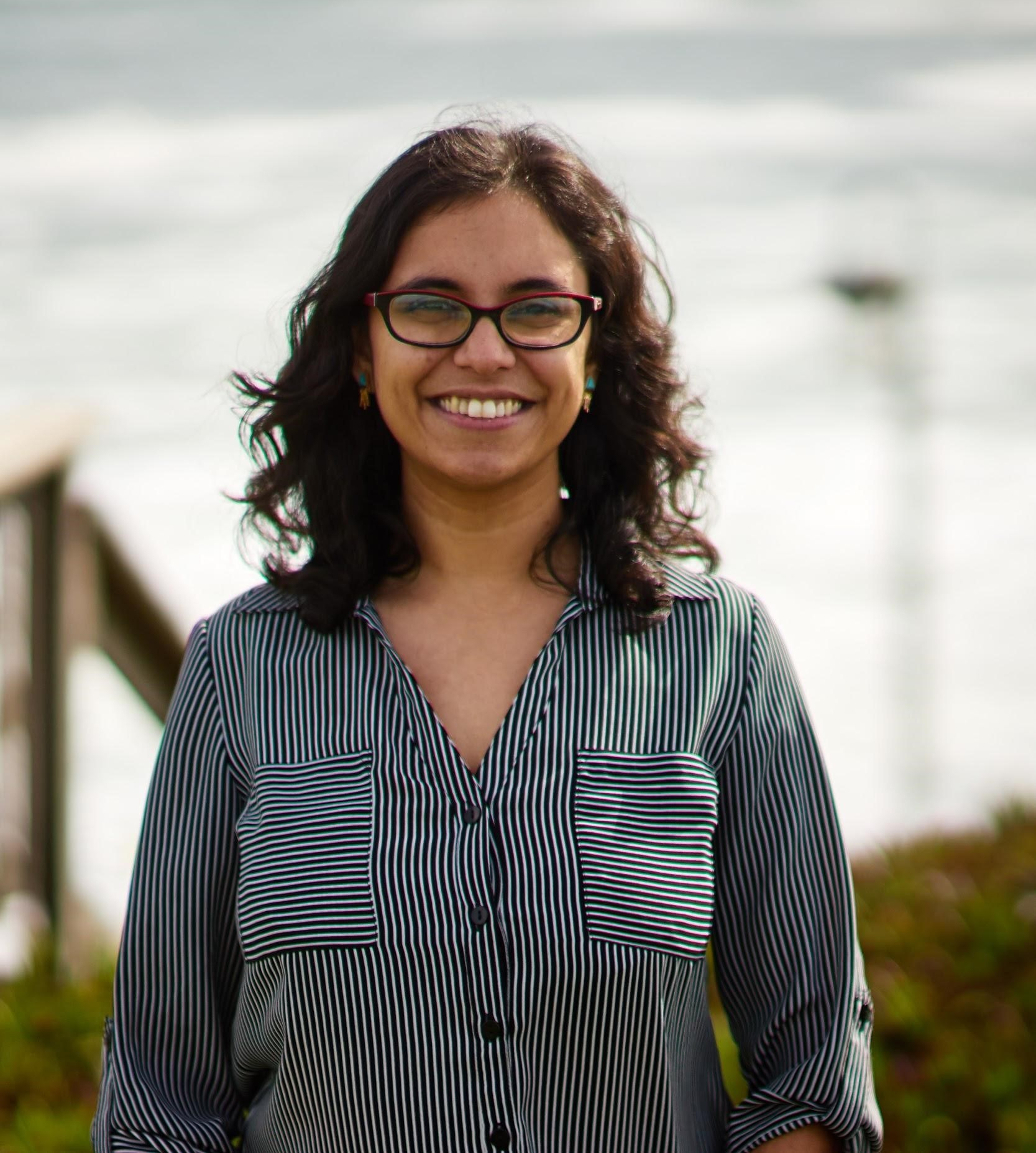 Priya Shukla is an ocean and climate scientist based at UC Davis’ Bodega Marine Laboratory. She received her undergraduate degree in Environmental Science and Management at UC Davis and earned her Master’s in Ecology from San Diego State University. Priya is currently a technician with UC Davis’ Bodega Ocean Acidification Research (BOAR) group, where she works on several projects to better understand and prepare for the effects of climate change on our . Priya uses science communication to bridge issues concerning social justice, rapid environmental change, and the scientific community. Connect with Priya @priyology and on her blog The Prosaic Mosaic.

The lens through which I communicate science has been heavily shaped by my father.

A self-taught naturalist, my father developed his keen observation skills in the rural Indian village of Nawapara and honed them 8,000 miles to the west in the diverse ecosystems of California. Despite absolutely no professional training, my father taught me about timberlines in Lake Tahoe, the tufa towers of Mono Lake, and the surprising diversity of tidepools in Monterey.

It wasn’t until I began my training as an ecologist that I realized how unique my early experiences were. The classical literature and those who professionally practice natural sciences today do not adequately reflect my father’s perspective – namely having experienced the challenges of poverty and immigration. Nor does the history and culture of ecology adequately reflect my own experiences, which have been affected by sexism, assimilation, and racism.

I am a woman of color navigating the largely white, male-dominated field of ecology.

During graduate school, I deliberately overlooked the monolith of white, male researchers in (marine) ecology – graduate school was arduous enough on its own without constantly reminding myself of systemic issues I felt little control over. Yet, I couldn’t help but notice that the leaky academic pipeline prevented too many talented female scientists from ascending to higher positions. I also couldn’t ignore the biases inherent to environmentalism and the natural sciences which preclude people of color from participating in ecology.

However, after the November 2016 election exposed that many scientists within STEM fields were oblivious to the barriers that minority scientists face, I felt compelled to add my voice to the conversation.

Inspired by a science communication short course at the Bodega Marine Laboratory, I decided to start a blog on Medium that features the experiences of marginalized scientists: The Prosaic Mosaic – an effort to normalize diversity in science”. Thus far, the series has covered topics including the barriers that LGBTQ+ and Asian-American scientists face, the erasure of women and minorities in modern science discourse, and the experience of one victim of sexual harassment within academia. My project has increased diverse experiences in science to fellow scientists. Also, my own eyes have been opened to the professional and emotional costs of confronting systemic issues in science.

Alongside stories of adversity, I want to showcase opportunities for resilience.

Wading into the vast array of issues that confront intersectional, marginalized scientists can be emotionally taxing and cloud our ability to find solutions. Thus, while it is important to highlight people’s negative experiences, it is equally important to share efforts underway to eliminate In partnership with Irvin Huang (Toxic Musings), I research and spotlight resources that facilitate diversity and inclusion in academia (Diversi-tea & Cookies). It is through these endeavors that I hope more diverse perspectives – like those of my father’s – will be found in greater abundance in .

To effectively share the stories of others’ adversity, I actively sought an audience.

1. I realized that if I was going to ask other scientists to share their pain, I first needed to share mine.

The introductory piece to The Prosaic Mosaic reflects my previously repressed experiences in academia – discrete moments I had opted to dismiss instead of directly address. Chief among these was my confusion with my own identity – where does an Indo-American woman that is often confused for a “Muslim” fit into the monochromatic field of ecology?

Although publishing this piece in a public venue was nerve-wracking enough, by far the most gut-wrenching moment was when I e-mailed the piece to many of my colleagues with a request to share it throughout their networks and suggest participants for the series.

I heard back from less than 10% of the people I contacted. Although this was initially demoralizing, these few people became my first readers and continue to be some of my greatest supporters.

2. I wanted the stories of marginalized scientists to extend beyond my professional and personal networks.

To ensure that my blog posts extended past this initial group of interested readers, I advertised my series on Twitter and put a call out for scientists that might be interested in participating. I believe that the vulnerability I expressed in that introductory piece coupled with sheer luck meant that my request was widely shared across the Twitterverse.

This one tweet introduced me to several people, including Michelle Barboza, the host of the Femmes of STEM podcast that tells the untold stories of womxn* scientists. She kindly invited me to join her as a guest to discuss Rachel Carson, which increased the visibility of The Prosaic Mosaic during its early stages.

Since then, I have continued to use social media as a tool to find (and follow) scientists involved and interested in enhancing diversity and inclusion within STEM, and I hope that my writing reaches them. On its face, this may seem like preaching to the choir, but diversity issues are nuanced, complex, and rife with learning opportunities. These stories are more impactful to an actively listening audience compared to an audience unwilling to acknowledge or engage with these issues.

I also use Twitter to follow (and unfollow when I am saturated, and then re-follow when I am again prepared to listen) people and organizations whose views challenge mine. Rather than doing this to better “know the enemy”, I do it to constantly remind myself that “people are complicated”. This has led to both fruitful and fruitless conversations, but also broadened my understanding of what motivates people to engage with issues that matter to them.

3. Soliciting scientists to be vulnerable within the confines of The Prosaic Mosaic is a big ask.

Since its debut in December 2016, posts on The Prosaic Mosaic have cumulatively garnered over 2000 views. Yet, I struggle to successfully find participants outside of my professional network that are willing to share their stories. I believe that this is because being publicly vulnerable is already quite challenging, but also allowing a virtual stranger to tell your story through their lens can feel dishonest. Additionally, some scientists may fear backlash if they provide information that is traceable to a specific person who wields influence over their career. While this can be disappointing, the most salient aspect of this widespread reticence is that it is symptomatic of how far science needs to go before it can be considered a diverse and inclusive enterprise.

1. Increase the visibility of issues that matters to you.

Effective science communication is very much about the human element. It is certainly easier to talk about issues that matter to you; but if you are personally invested, you are also likely a stronger advocate for the cause. I am by no means a perfect a conduit for the concerns of marginalized scientists, but I am deeply motivated to change the status quo. So, I consider my voice a valuable addition to an ongoing conversation.

2. Connect with a community.

Engaging in science communication can introduce you to like-minded individuals with whom you can work to advance your cause. In opening myself up to dialogues about diversity and inclusion, I have discovered an immense trove of incredible people who work to improve the experiences of marginalized scientists (check out #marginsci on Twitter).

3. Expand your horizons: discuss things that make you uncomfortable.

It is not easy to articulate complex, uncomfortable topics. Communicating issues concerning inequality in academia has been and continues to be incredibly difficult for me, and it has yet to become noticeably easier.  However, it has given me a venue to hone my message and sort through muddled frustrations.

*NOTE: “Womxn” is not a typo. It is nomenclature used to include gender non-conforming ‘women’. I use it here specifically because that is how Michelle would describe the subjects of her podcast.