#MySciComm: Katie Burke on forging a path from science to science journalism

This week, Katie L. Burke responds to the #MySciComm questions! 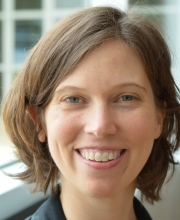 Katie is the Digital Features Editor at American Scientist magazine. She holds a PhD in biology (ecology and evolution) from the University of Virginia, where she studied conservation biology in eastern deciduous forests of North America. As a journalist and editor with American Scientist, she helps scientists tell their stories, share the wonder of science, and discuss barriers to learning and doing better science. Connect with her @_klburke and the-understory.com.

I considered going into science writing multiple times—even before I went to graduate school.

Throughout my PhD studies and early science career, better communication about science seemed important to addressing a range of concerns. For example, I was fascinated and baffled that members of Congress were questioning the worthiness of studies funded by the National Science Foundation, and that climate change denial was still a thing after 40+ years of research and decades of education campaigns. The head of the American Association for the Advancement of Science, Alan Leshner, said in 2012 that “the tension between science and politics is greater than at any time in his scientific career” (he might revise that now that it’s 2017, given the current state of science and politics).

I was disturbed by how many undergraduate students were intimidated by science and math, even though they clearly were able to understand it, and even though science and math could continue to be useful, fun, and empowering in their professional or civic lives. I was concerned about the growing cost of higher education, and the troubling sense of inequality in the academy as well as in the nation.

I wanted to do something about these problems, and I was searching for a career that would make it possible for me to address them.

I didn’t pursue science journalism in grad school, though. And after completing my PhD in ecology and evolution, I spent a year as a visiting professor. Simultaneously, I was looking for a change—a change in higher education, in science, in my career.

I finally found what I was looking for in the burgeoning field of science communication. There, a community of likeminded scientists, scholars, journalists, and writers were openly discussing and researching such issues.

I began to seriously consider transitioning from an academic pathway to one in science communication. First, I set up a blog, with the express purpose of developing a writing habit. Second, I tapped into my friends’ and colleagues’ networks and talked to any and all science writers I could meet in person or online.

My blogging and presence on other social media were instrumental. I found support among people who understood the ordeal of the academic job market and were problem-solving the complex issues I cared about. I realized that there was something bigger than what was happening in my career at my institution, and that a movement was building.

These informational interviews helped me get a sense of the challenges and benefits of a scicomm career. This networking strategy also let people know I was looking for a scicomm job. Someone I talked to ended up contacting me about a job opening at American Scientist that led me to my current workplace. Without her encouragement, I’m not sure I would’ve thought to apply; I didn’t completely fit the job description. But after an edit test and an in-person interview where I met the team I would work with, it felt like a great fit. I had other offers at the same time, including a postdoc that would have kept me in scientific research, but a permanent position and a career shift were much more attractive.

Many of the skills I honed as a PhD student and visiting professor translated well to editing and writing about science.

I am committed to a job where I learn every day. I am creating new information and ideas. I participate in an intellectual community. I focus on education and outreach with the goal of making science and statistics unintimidating and approachable to a wide diversity of people. I work toward the goal of reframing entrenched debates on science issues to better inform people.

Despite my transferable skills, there were many additional skills I had to develop on the job.

From my teaching and blogging experiences, I had a good sense of what topics in biology people had a hard time understanding and how to keep people engaged while explaining something complicated. But journalism and nonfiction writing are skills that also can take a lifetime to develop, and I had a lot to learn about these styles of writing. Much of what I have learned has been from other editors. I’ve also done some formal continuing education (the Poynter Institute is great for journalistic writing and editing training. The Duke Center for Documentary Studies is great for learning audio and video production; and the go-to beginners’ guide is the Science Writers’ Handbook, and I especially love the recent add-on e-book by Michelle Nijhuis on writing personal essays). I also participate in a group of science writers with whom I discuss nonfiction writing and creative goals.

The work culture in science communication encourages well-roundedness, and colleagues discuss work, hobbies, family lives, passions, and values with candor. I’ve found science journalists support one another, offering advice to early-career journalists like me, collaborating with one another on projects, and generously exchanging ideas.

Well, I have four, in addition to the journalism training resources I mentioned above.

1. Academic hiring schedules are different from those in nonprofit, industry, and other sectors.

While my colleagues and friends were hired for academic positions six months or more before they began, I had a big question mark on the horizon while I finished up my last semester of teaching. When my temporary academic position came to an end, the number of interviews I was offered markedly increased. This is probably because nonacademic employers often want to interview someone who is available within the next month or so.

2. A risk-free strategy is not always the pathway to success.

I held out for the “right” job, risking unemployment, which was terrifying. This decision was ultimately empowering, because I stayed true to my unique talents and passions, and came to realize mine were appreciated and sought-after in a broader job market.

3. There is no tried-and-true formula for successfully navigating the journalistic seas right now.

One has to be comfortable with the unknowns that this shifting landscape entails to be happy in journalism.

If you’re interested in becoming a science writer, then start. The internet is hungry for content, and many media outlets are more than happy to receive pitches from experts about topical issues in their fields, especially if they show that they’ve learned the basics of pitching and writing a nut graf. The worst anyone can say is no, and you’ll often get helpful feedback in the process.

Even though I often give this advice, people rarely act on it. I can crank out a 200- to 500-word piece pretty quickly, and you probably can, too. So, no excuses about being too busy. What’s really at stake is believing in yourself.