In a new study published in the Ecological Society of America’s journal Ecological Monographs, entomologist C. Scott Clem, his former advisor Alexandra Harmon-Threatt from the University of Illinois at Urbana-Champaign, and isotope ecologist Keith Hobson from the University of Western Ontario used a range of methods to document long-distance migration for the first time in several species of North American hover flies, some of the continent’s most important pollinators. 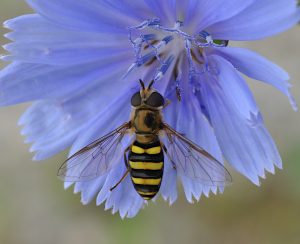 Hover flies like this one mimic bees and wasps, though they have only two wings. Bees and wasps have four wings. Like bees, they are also important pollinators. Researchers found this hover fly, Eupeodes americanus, to be a long-distance fall migrant like many of its European cousins. Photo by Scott Clem.

“When people think of pollinators, they typically think of bees and maybe butterflies,” said Clem. “But true flies of the order Diptera are the second most important pollinators in North America, next to bees. It’s astonishing. These hover flies are hugely beneficial to ecosystems, and we are still finding these brand-new behaviors that are crucial aspects of their life history.”

More than 800 species of hover flies, members of the insect family Syrphidae, live in North America and on every continent except Antarctica. Most of them look like sleek flies painted to look like wasps or bees. The yellow-and-black stripes serve to discourage predators, but they may have also helped humans overlook them. Hover flies are one of the most common pollinating flies.

Hover flies, or flower files, earn their name by hovering near flowers and other plants. They play important ecological roles, including pollination, biological control and decomposition. As adults they pollinate a wide range of plants. As larvae, many species eat aphids, which are crop and garden pests, while others are decomposers and important nutrient recyclers. Understanding how, why, and especially which insects migrate is key to understanding the continent’s ecosystems.

In Europe, studies have long established that some of these species migrate. However, when Clem went looking for similar research on North American syrphids, most of what he was able to find came from a small study from the 1920s. Almost no hard data existed on whether North America’s hover flies migrate. 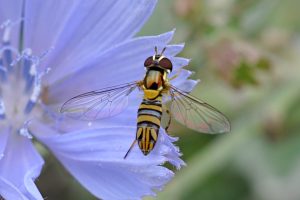 This hover fly, Allograpta obliqua, does not seem to migrate but sticks close to home. In their winged adult phase, hover flies are important pollinators, second only to bees. As larvae, they are important biological controls for crop pests. Photo by Scott Clem.

To study the phenomenon, Clem and his team analyzed four hover fly species native to the eastern United States. They looked at the isotopic composition of the chitin in insects’ wings over several seasons to understand whether the flies were local or had migrated. Of the four species, they found that one species, Eupeodes americanus, showed strong evidence of being a long-distant fall migrant. Both Syrphus rectus and Syrphus ribesii showed some potential evidence of migration as well, while Allograpta obliqua seems to not migrate at all.

“Isotopes are one of our best tools when it comes to studying insect migrations,” said Clem. “One of the reason insect migration is not well studied is because insects are so difficult to track. You can put transmitter on a bird and see where it goes, but you can’t do the same for an insect. These tiny flies are traveling vast distances.”

They supplemented this discovery by tracking the numbers of flies in each location over several seasons, as well as looking at how the flies’ body morphology and freeze resistance varied over and across species. They found that in the fall, the species that migrated tended to be present in higher numbers. The migratory flies also tended to have larger bodies and wings, and E. americanus was much less cold-tolerant than the homebound A. obliqua, who stays rather than following warmer weather south. 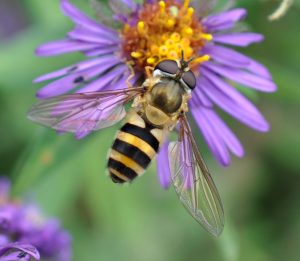 Hover flies are native to every continent except Antarctica. They are common insects and provide vital ecological services, and yet much remains to be discovered about their basic life history. Photo by Scott Clem.

Globally, insects are declining, and hover flies are no exception. Hover flies are vital to ecosystems in ways scientists don’t even understand yet. They help farmers by controlling pests on crops, pollinating countless plant species and, with long distance migration, move pollen, energy and nutrients hundreds or even thousands of miles across the continent.

“This study is a testament to how much we have left to discover, even when it comes to these really common insects.”

Press registration is open for the 2022 joint annual meeting of the Ecological Society of America and the Canadian Society for Ecology and Evolution, August 14-19, in Montréal, Québec. To register, please contact ESA Public Information Manager Heidi Swanson (gro.asenull@idieh). Learn more on the meeting website.