March research news from the Ecological Society of America A tagged, adult marsh rice rat (Oryzomys palustris) is measured in the field. Marsh rice rats are abundant in coastal saltmarshes and are the reservoir host of a pathogenic hantavirus (Bayou orthohantavirus). Photo by Anna Pérez-Umphrey.

According to new research conducted in Louisiana coastal saltmarshes, the 2010 Deepwater Horizon oil spill has not had a lingering influence on the prevalence of Bayou orthohantavirus (BAYV) in marsh rice rats. BAYV produces hantavirus pulmonary syndrome in humans, which has a case fatality rate of 40%. After the 2010 oil spill, Louisiana coastal saltmarshes experienced significant vegetation loss, and researchers were concerned that rice rats might seek habitat nearer to human habitation, thereby causing the risk of BAYV spillover to increase. The newly published research was conducted approximately 40 kilometers from the suburbs of New Orleans in sites only accessible by boat. The findings revealed that hantavirus prevalence was related to the presence of certain types of vegetation and other ground-cover characteristics, but that any effects of the oil spill on the hantavirus–rat relationship had dissipated by the time the study was launched in 2013. However, forecasts of further disturbance in this region include predictions of land loss, climate change and oil drilling, which will likely influence the prevalence of BAYV in rice rats, and the authors argue that the close proximity of the viral reservoir to New Orleans merits continued surveillance. 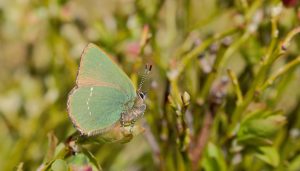 A green hairstreak (Callophrys rubi), one of the butterfly species that appears in the database. Photo by Patrick Cook.

Researchers have published a new free database containing information on all the butterflies and large moth species found in Great Britain and Ireland. This resource will allow conservationists to access ecological information about the region’s butterflies and macro-moths via a single digital resource for the first time. All but one of the database authors are affiliated with Butterfly Conservation, an organization that is working to create chains of butterfly habitat across large areas of countryside, as well as to monitor moth and butterfly populations and educate communities about their efforts. Butterflies and moths are among the most threatened groups of wildlife in the UK. The database pulls together information from field guides, books and journals, and includes details about species’ physical traits, life-cycle timings and feeding habits – all crucial details for conservation decision-makers.

Read the article: Traits data for the butterflies and macro-moths of Great Britain and Ireland


In ocean monitoring, drones can fill the gaps left by satellites

Drones that are affordable, portable and simple to fly are on their way to becoming a mainstay of marine biological research, says a new paper by Duke University Marine Laboratory researchers. Despite plans for groundbreaking advances in satellite-based remote sensing, these platforms will not be able to capture the full range of critical biological processes by the end of the 2020s. For example, the entire biomass of oceanic phytoplankton is consumed and regenerated every two to six days. Reductions in phytoplankton growth compromise uptake of atmospheric CO2 and disrupt the marine food webs that support fisheries. However, the fine-scale, fast-paced processes that govern phytoplankton communities are difficult to capture with traditional satellite-based remote sensing systems and occupied aircraft. Currently, military drones are used for monitoring tropical cyclones and ocean surface processes, but these large and sophisticated drones are expensive and require extensive infrastructure and logistical support. Small aerial drones, however, can observe fine spatial resolutions and can be deployed at frequencies that fill this observational gap. 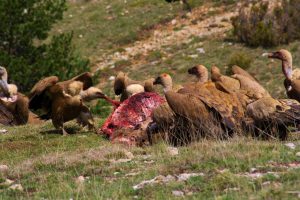 A group of griffon vultures descends on a dead doe in Catalonia. Photo by Mario Modesto Mata, CC BY-SA 3.0.

In 2001, the European outbreak of bovine spongiform encephalopathy, also known as mad cow disease, brought about sanitary legislation that banned the disposal of livestock carcasses in fields. This policy eliminated a key food source for Eurasian griffon vultures, a prevalent and long-lived scavenger species. According to new research, the abrupt food shortage triggered delays in egg-laying dates and dramatic drops in vultures’ ability to produce offspring. Populations quickly recovered once the sanitary policies allowed for the disposal of carcasses, but the new findings show that the effects of these changes in reproduction could still be seen in the population more than a decade later.