February research news from the Ecological Society of America 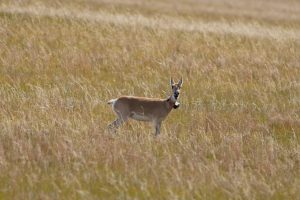 A female Mongolian gazelle (P. gutturosa) with a GPS collar in the Mongolian steppe. Solar-assisted GPS collars allow researchers to monitor the movements of animals for several years and provide a lifelong history of interactions between animals and their environment. Photo by Nandintsetseg Dejid.

In October 2014, researchers placed GPS collars on 15 gazelles on the Mongolian steppe. The solar-assisted collars were meant to track the gazelles over the course of three years – but the collar of one female gazelle ended up providing hourly location data for almost five years. Her movement patterns were unusual; she frequently ventured for hundreds of kilometers into unfamiliar terrain, visiting many areas only once but other areas multiple times in an unpredictable manner. She traveled across regions covered in heavy snow; encountered oil fields, villages and mining operations; traversed rivers and hilly terrain and visited the borders of Russia and China. The overall distance traveled by this gazelle was 18,000 kilometers – equivalent to roughly half of the equatorial circumference of the Earth.

Read the article: A gazelle’s extraordinary, 18,000-km-long journey through the steppes of Mongolia

Recent advances in wildlife tracking and biotelemetry technologies can improve the distribution of vaccines to animals harboring diseases that can be passed on to humans, according to new research that used models of raccoon movement patterns to inform oral rabies vaccination strategy in and around Burlington, Vermont. In the United States, the U.S. Department of Agriculture Animal and Plant Health Inspection Service National Rabies Management Program (USDA-APHIS NRMP) uses oral rabies vaccination (ORV) as the main approach for reducing the prevalence of rabies susceptibility in raccoon populations and for containing the westward spread of the raccoon rabies virus. In urban and suburban areas, oral vaccines are encased in blister packs covered in fishmeal or a vanilla-flavored bait, then distributed by hand and from vehicles. In rural areas, they are distributed by fixed-wing aircraft. The authors of this study found that baiting strategies that match raccoon movement can increase the proportion of raccoons with rabies antibodies in urban-suburban areas, and that vaccination coverage could be improved by extending distribution beyond major roads in developed areas via helicopters or bait stations. 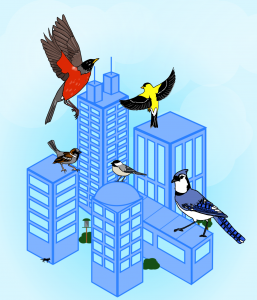 Socioeconomic features of cities filter for birds based on their life-history traits. While cities are more similar to other cities than natural areas, they vary in ecologically important ways. Graphic by Chloé Schmidt.

As cities became more compact with less sprawl, they tend to support more migratory bird species, says new research based on breeding season observations of 213 songbird species observed in 551 urban areas across the United States. The authors found that species had lower body mass in cities with higher median income, and higher body mass in highly populated cities. Because higher human population size and sprawl are more associated with environmental disturbance, and more compact cities and those with higher median income are correlated with resource stability and abundance, the authors were interested in the effect that these factors would have on the body size, lifespan, reproductive output and migratory status of bird species.

Read the article: The socioeconomic status of cities covaries with avian life-history strategies

Nearly all American chestnut trees were killed after chestnut blight was introduced to the U.S. in the late 19th century. Now, reintroduced American chestnut trees in the southern portion of their range are threatened by a root disease, caused by the pathogen Phytophthora cinnamomic. New research by USDA scientists suggests that the disease is likely to thwart restoration efforts unless root-rot resistance is incorporated into the species through breeding and biotechnology. The disease, which is spread in part by the plant nursery trade, is expected to move northwards as the climate warms. The authors also suggest that restoration efforts be targeted to areas where root rot is not expected to be present well into the future. The study focused on western Maryland, in two state forests on and near the Appalachian Plateau – an area close to the center of the species’ former range.

Shrub cover increased in southeast Australian woodlands following the transition from Indigenous management to British occupation in 1788, says a new analysis of paleoecological models based on fossil pollen sequences. According to the authors, the disruption of Indigenous burning practices contributed to these ecological changes, which have sensitized fire-prone regions to unprecedented catastrophic wildfires. Prior to British colonization, Indigenous peoples managed the balance of flammable vegetation by frequent ignition of small fires, thereby increasing landscape productivity, facilitating hunting practices and promoting diverse mosaics of vegetation that were less prone to destructive fires than current forests. The authors believe their findings are the first quantitative evidence that the region’s forests and woodlands contained fewer shrubs and more grass before colonization.

Researchers bring snowshoe hares back to a Wisconsin wildlife area 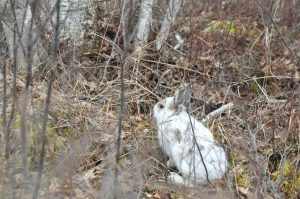 In 2017, researchers moved 96 snowshoe hares from Chequamegon National Forest Medford District in Wisconsin to the Sandhill Wildlife Area. The maneuver was part of an ambitious effort to reintroduce a complex historical interplay of predators and prey, essentially winding back the clock in an area where snowshoe hares had been extirpated in the 1990s by climate change. In this part of the Great Lakes region, the community remains in constant flux, with fishers, coyotes and bobcats hunting down snowshoe hares, North American porcupines and ruffed grouse. As snow cover decreases in the area with the changing climate, however, the playing field changes: snowshoe hares become less able to blend in to their surroundings. The authors found that climate change has a range of effects for the larger community, including direct and negative impacts on survival in snowshoe hares, direct benefits for adult porcupine survival and indirect effects on biotic interactions across the landscape. These changes, the authors suggest, could result in community disruptions as northern-adapted species contract and southern species expand their range northward.