More January research news from the Ecological Society of America 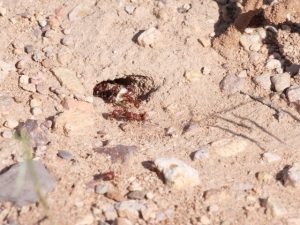 A foraging red harvester ant brings a seed into the nest. Photo courtesy of Sam Crow.

Red harvester ants are a highly cooperative species, relying on complex divisions of labor to accomplish foraging, defense and reproductive tasks. Researchers assembled a detailed portrait of over 1000 red harvester an colonies observed between 1988 and 2019 near Rodeo, New Mexico, with around 300 colonies present in the area in any given year. Such long-term population monitoring of ants is rare and presented a unique opportunity for the authors to observe how changing climate patterns produce changes within colony demographics – changes that would be impossible to detect over shorter timescales. Each colony can live for up to 30 years, but their lifespan depends on factors like rainfall and the proximity of neighboring colonies, since colonies compete with neighbors for foraging area.

Red harvester ants are not considered a pest species, and because the ants feed on seeds, they play important roles in spreading the seeds of local plants. Each colony has one queen, and when the queen dies, the remaining ants do not adopt a new queen – they simply continue to work until they die.

Read the article: Rainfall, neighbors, and foraging: The dynamics of a population of red harvester ant colonies 1988-2019 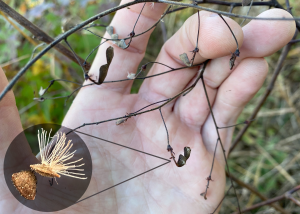 Plants have evolved many methods for their seeds to get around, and it often involves catching a ride on wind, water or animals (including humans). While conducting research in Florida’s Tall Timbers Research Station, David Mason observed what appears to be a previously undescribed method for seeds to spread around: by piggybacking on the seedpods of another species. Mason proposes calling the interaction “heterocarpochory,” which translates from Greek as “using another fruit to disperse.”

Read the article: Heterocarpochory: hitching a ride on fruit 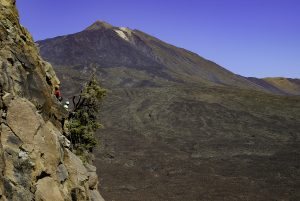 In 2019, researchers published an account of a 1,100-year-old juniper on Tenerife Island, the largest and most populous of the Canary Islands. This tree, called “The Patriarch” (though the tree is in fact a female) was located on a subalpine plain – a relatively hospitable habitat for a tree to grow old. Now, the research team reports finding even older trees on the island’s vertical volcanic cliffs. These cliffs are not only a more difficult place for trees to grow, they also presented a challenge for the researchers to access. The paper’s authors report using advanced climbing techniques to access 61 trees. They found two junipers that were over 1,000 years old; at 1,236 and 1,481 years old, both were even more ancient than “The Patriarch.” 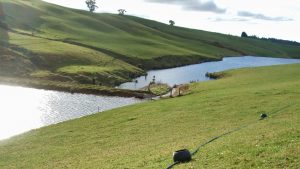 A small artificial impoundment. Although each impoundment is typically very small, their cumulative impact on flow regimes can be considerable. Photo courtesy of C Wiesenfeld.

Regulation on agricultural producers’ right to construct farm and stock ponds is controversial, and while each individual impoundment has negligible effects, their widespread use across river basins can produce substantial cumulative impacts, says new research conducted in the Murray Darling River basin in Australia and the Arkansas River basin in the United States. Large dams create striking changes in the surrounding landscape and in the biodiversity and ecosystem downstream of the dam, and global assessments of river health account for these changes – but waterway assessments largely ignore the impacts of smaller dams and artificial ponds constructed for agricultural and livestock purposes. Researchers found that while smaller impoundments represent a very small proportion of storage capacity compared that of larger dams, they have an outsized impact on hydrological stress within a waterway, increasing the relative length of impacted waterways by 380% compared to the extent of impacts from large storages. Over 3 million voters in Colorado recently weighed in on Proposition 114, a ballot measure to restore the gray wolf to its former range within the state. Previous public opinion polls suggested widespread support for wolf restoration, but the proposition passed with only a slim margin (50.9% of the total vote), and according to new research from Colorado State University scientists, there was a strong relationship between support for the ballot initiative and political support for the Democratic candidate for president in the 2020 election. Additionally, areas closer to proposed wolf restoration areas showed less support for the ballot initiative. Without considering presidential votes, there was a positive relationship between educational attainment and support for wolf restoration. However, when accounting for presidential votes, the team found that voters for President Biden in precincts with lower levels of education had relatively higher levels of support for wolf restoration than voters in precincts with higher educational attainment.

Previous studies have explored the relationships between demographics, livelihood, and self-reported attitudes and beliefs, but few have examined how these factors correspond to actual public behavior, i.e. voting. 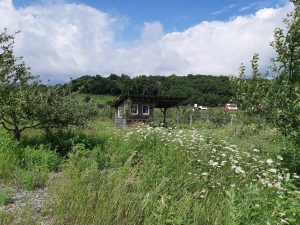 A farmstand among apple trees at the entrance to a mixed fruit farm in Eastern Wisconsin. Photo courtesy of Maayan Kreitzman.