On the “Island of the Blue Dolphins,” a glimmer of hope for a rare fox species 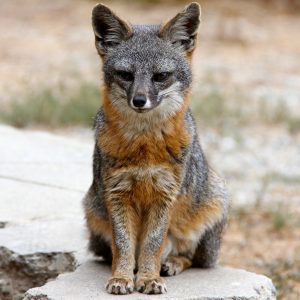 A San Nicolas Island fox observing its habitat. Island foxes are one of the world’s smallest canids, about the size of a housecat. Photo courtesy of Francesca Ferrara / US Navy.

The San Nicolas Island fox, a subspecies of the Channel Island Fox only found on the most remote of California’s eight Channel Islands, is at a low risk of extinction, new research published last week in Ecosphere shows.

In the past decade, the population of San Nicolas Island fox has decreased by nearly half, with just 332 foxes remaining in 2016.

The study, conducted by researchers from Montana State University, the University of Colorado and Naval Base Ventura County, predicted future fox population sizes assuming that current relatively dry environmental conditions persist. The foxes went extinct within 50 years in only 2.5% of the computer model’s simulations. 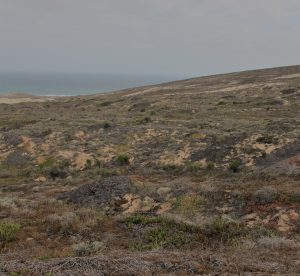 A view of drought-affected habitat on San Nicolas Island, including large patches of dead ice plant, a once-favored food of island foxes, in the foreground. Photo courtesy of Francesca Ferrara / US Navy.

“This relatively low extinction risk is good news for San Nicolas Island foxes, but they are not out of the woods,” said Victoria Bakker, an assistant research professor at Montana State University and the paper’s lead author. “As a top carnivore living on a small island with degraded and invaded habitats, they are likely to experience the effects of climate change earlier and more acutely than other species. If climate change leads to even more frequent or severe droughts, the risk to foxes could rise substantially.”

The research points to strategies that could increase the foxes’ resilience to a changing climate and other human-caused shifts that have contributed to their decline. 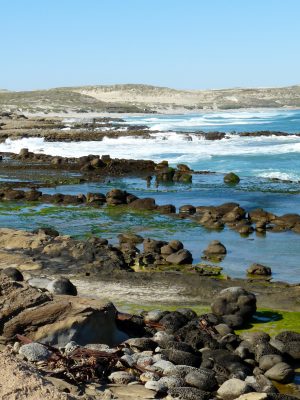 The rugged coastline of San Nicolas Island, the most remote of the California Channel Islands. Photo courtesy of Francesca Ferrara / US Navy.

According to co-author Francesca Ferrara, a natural resource specialist at Naval Base Ventura County, the island’s resource managers are focusing on biosecurity, restoration of habitat and food resources, and minimizing human-wildlife conflict.

Biosecurity efforts in particular have been drawn into the spotlight over the past year.

“We have ongoing vaccination and monitoring programs in place to ensure that no new invasive species or pathogens establish themselves on the island,” said Ferrara. “As the world has now seen with the COVID-19 pandemic, a population that has not been previously exposed to a disease or pathogen can quickly be decimated by it. Due to their isolation, the island foxes are at risk to diseases that normally circulate in mainland wildlife. Since they have never been exposed and have no natural immunity, a pathogen that is mild to a mainland species could prove deadly to the island fox.” 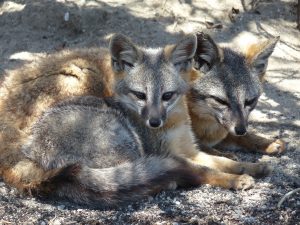 San Nicolas Island is the setting for the popular 1960 children’s novel Island of the Blue Dolphins, which draws from the story of Juana Maria, a Native Islander woman who spent 18 years alone on the island after her people were removed in 1835.

Today, San Nicolas Island functions as a United States naval station, but according to Ferrara, the island has retained its sense of remoteness and distinctiveness.

“The island fox really has a special place in my heart,” Ferrara said. “They never cease to delight me. They are bold and curious; their attitude and spunkiness is unmatched. I feel so fortunate that I can not only regularly cross paths with a small island fox foraging for insects but then shortly afterwards I can head over to observe one of the largest active rookeries of thousands of enormous breeding northern elephant seals.” 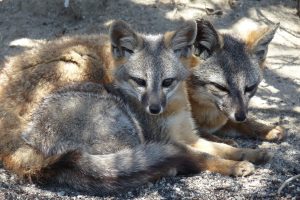