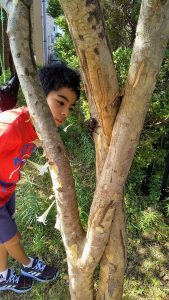 An 11-year-old student is now the youngest scientist to have published an article in an Ecological Society of America journal as the first author.

The student, Ryo Shibata, conducted research showing that a rhinoceros beetle (Trypoxylus dichotomus), long believed to be a nocturnal species, exhibits different circadian activity patterns when it feeds on an introduced ash tree, Fraxinus griffithii. He published his findings in the journal Ecology.

The research began with casual backyard observations: when Shibata, a student in Saitama Prefecture, Japan, noticed that rhinoceros beetles were flocking to an ash tree in his family’s garden in the summer of 2019, he began documenting the behavior of the beetles for a self-directed summer science project. He realized that the beetles on the ash tree were actively feeding and mating all day, but the beetles on oak trees – the beetle species’ usual host – were only active during the night.

That was when Shibata decided to contact Dr. Kojima Wataru, a senior lecturer at Yamaguchi University who has written several books for young people about rhinoceros beetle ecology. Shibata mentioned that he was recording the number of beetles on the ash tree multiple times of day, which caught the scientist’s attention.

“I told him to continue the recording because nobody has data on the activity patterns on ash trees while I – and perhaps other naturalists – was vaguely aware that the ash beetles are active during daytime,” said Wataru.

At the end of the summer, Shibata sent his findings to Wataru, who said he “was surprised by how well his field work has been organized and how carefully the data had been collected.” 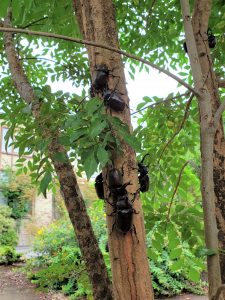 Trypoxylus dichotomus adults feeding on the sap of the introduced ash tree during the
day. Photo courtesy of Munenori Inada.

Wataru advised Shibata to track the movement of individual beetles the next year. In the summer of 2020, Shibata marked 162 beetles with acrylic paint and eventually confirmed that most of the beetles were flying to the ash tree during nighttime and continuing to feed until well after sunrise.

“In sum, this study project was launched by Ryo himself and all data for the paper was collected by him. I just summarized his data and wrote English manuscript,” Wataru explained.

“Collecting field data was so exciting,” Shibata said in an email interview that Wataru translated for ESA. “The most memorable experience was when I heard a loud sound produced by a female that was carving the bark of the ash tree.”

Shibata’s beetle research has inspired a deeper interest in learning more about the species. “I can hardly wait for summer beetle season,” said Shibata. “I have plans for various field experiments including tracking beetles using radio telemetry. I am also interested in the reason why the activity patterns of the beetles on the ash tree change.”