February research news from the Ecological Society of America

Snorkelers find rare salamander eggs
Texas biologists spotted two tiny eggs while conducting fieldwork, which they shepherded back to the lab and raised in captivity.

An albino plant subsists on fungi
A “ghost” variant of an orchid is discovered in the wild, and it appears to be drawing nutrients from fungi instead of from the sun.

Indigenous plants promote insect biodiversity in urban greenspaces
In Melbourne, Australia, scientists are working with city officials to build parks that are better for indigenous insects.

Found: eggs of the Comal Springs salamander, previously undocumented in the wild

While searching for adult Comal Springs salamanders (Eurycea pterophila) to take into captivity as a precaution against extinction in the wild, snorkelers found two tiny salamander eggs attached to the underside of a rock in the Comal River, Texas. Biologists transported the eggs back to San Marcos Aquatic Resources Center and successfully raised them in captivity.

Why it matters: Until now, no eggs of this salamander species have been found in the wild – the eggs are small (1–2 mm in diameter), and female salamanders lay each egg individually on subterranean surfaces. The species is currently part of conservation efforts under the Edwards Aquifer Habitat Conservation Plan (EAHCP).*

Read the article in Ecosphere: Discovery of central Texas Eurycea eggs in the wild (for a PDF, contact gro.asenull@idieh)

An albino plant subsisting on fungi 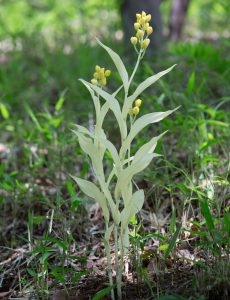 While conducting research in Yokohama, Japan, plant biologists stumbled upon a non‐photosynthetic or “ghost” variant of the golden orchid (Cephalanthera falcata).

A renegade among plants: Albino plants lack chlorophyll, the key pigment for photosynthesis, which means they usually die or fail to sustain growth. But this pale variant had managed to reach almost the same size as its photosynthetic neighbors, suggesting that the orchid was obtaining nutrients from symbiotic fungi.

Birds and plants in southeastern Australia’s temperate dry forests show a high level of resilience to prescribed fire. The region is home to bird species such as the miniscule (~3 inches long) spotted pardalote, the iconic laughing kookaburra, and the dirt-displacing superb lyrebird.

The big picture: in 2019 and early 2020, large wildfires tore through millions of hectares of Australian forests.

One result: On a species-by-species level, the amount of time elapsed since prescribed fire did not have a strong effect on most of the 43 bird species they found.

Prescribed burning can reduce wildfire risk and conserve wildlife – as long as it is done right. The authors suggest several guidelines for ensuring that prescribed fires do not jeopardize wildlife habitat.

Read the Ecological Applications paper – How does prescribed fire shape bird and plant communities in a temperate dry forest ecosystem? (for a PDF, contact gro.asenull@idieh) 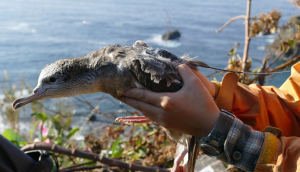 A fledgling fitted with a data logger. Photo courtesy of Ken Yoda.

Recent tracking technologies have revealed that pelagic seabirds can traverse mountains to reach wintering areas – journeys that are rarely observed by birdwatchers.

In a study recently published in Ecology, researchers fitted streaked shearwater chicks on Awashima Island, which lies off Japan’s west coast, with GPS loggers. Then, they tracked the fledglings heading south on their journey across the Pacific Ocean.

Details: In 2017, favorable tailwinds allowed most fledglings to take a straightforward path through well-defined valleys over Japan’s main island. In 2018, however, headwinds prompted 18 fledglings to attempt a crossing over one of the nation’s highest mountain ranges, whose peaks reach up to 3000 meters. Ten birds survived the crossing, only four of which survived the next month.

Read the Ecology paper: Annual variations in the migration routes and survival of pelagic seabirds over mountain ranges (for a PDF, contact gro.asenull@idieh)

Background: Many urban greenspaces include intensely manicured lawns and are planted with non-native flora. These plants are not well-suited to sustain populations of native or indigenous insects, birds and bats – all of which play important roles in pollination, pest control, soil fertility and other services.

What they did: The researchers established study plots at 15 Melbourne public parks and sampled the plants and insects within them.

What they found: Having multiple “layers” of vegetation proved to be an important design element for insect diversity, with “mid-story” vegetation – the bushes and shrubs that are smaller than trees but bigger than grasses and lawns – playing an especially important role.

Corrections:
*The original news tip sheet posted on 2/25/21 has been updated to reflect two changes concerning the Texas salamander research: (1) E. pterophila has gone through a number of different taxonomic names and is not known as the fern bank salamander. This species is the Texas salamander with a subpopulation in Comal, locally known by the common name Comal Springs Salamander. (2) The species is no longer under review for federal listing. This review has ended and the species is currently part of conservation efforts under the Edwards Aquifer Habitat Conservation Plan (EAHCP).
**The line “’Lower-midstory foraging birds,’” for example, responded positively to prescribed burning” was incorrect. Lower-midstory foraging birds responded positively to time since prescribed burning.