In December 2016, Jeff Corbin, professor of biology, was part of a team of ecologists who traveled to Cuba to learn how the country’s unique political and economic history might have altered its natural history. 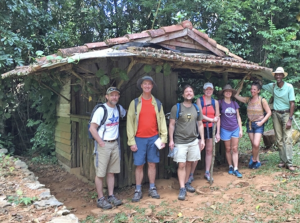 Jeff Corbin, professor of biology (second from left), was part of a team of ecologists who traveled to Cuba to learn how the country’s unique political and economic history might have altered its natural history. Photo courtesy of Union College.

Experts in the study of exotic species invasions, the scholars visited major cultural sites such as Havana, Trinidad and the Bay of Pigs. They also spent time at unique bio preserves that highlighted Cuba’s distinct biodiversity.

The eight-day trip sparked an international collaboration between academics from the New York Six Liberal Arts Consortium and two Cuban scientists into how the Cuban revolution and the U.S. embargo that followed influenced the island’s biodiversity today.

The group’s research showed that trade and tourism in the Caribbean are among the most important factors in understanding the establishment of invasive species in the region. However, Cuba’s recent history – its Revolution and the subsequent U.S. embargo – makes it stand out from the other islands of the region.

Indo-Pacific lionfish (Pterois spp) have established invasive populations in the western Atlantic Ocean and Mediterranean Sea. Given that extirpation across their broad invaded range is impractical to achieve, resource managers could designate these predators as candidates for “functional” eradication, setting quantitative targets for suppression efforts at priority locations. In the March issue of Frontiers, Green and Grosholz explain how this strategy may minimize the species’ adverse ecological impacts and recolonization.