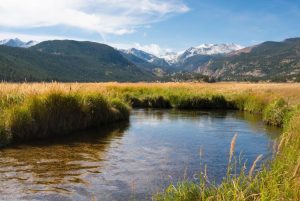 The golden-mantled ground squirrel (Callospermophilus lateralis) is a popular sight among tourists in the Rocky Mountains—the small rodent is a photogenic creature with a striped back and pudgy cheeks that store seeds and other food.

But there’s a reality that Instagram photos don’t capture, said Christy McCain, an ecologist at the University of Colorado Boulder. In a new study spanning nearly 13 years, she and her colleagues discovered that the ground squirrel has joined many other small mammals in Colorado’s Rocky Mountains that are making an ominous trek: They’re climbing uphill to avoid warming temperatures in the state brought on by climate change.

“It’s frightening,” said McCain, an associate professor in the Department of Ecology and Evolutionary Biology. “We’ve been talking about climate change in the Rockies for a long time, but I think we can say that this is a sign that things are now responding and responding quite drastically.”

The golden-mantled ground squirrel, which is often confused for a chipmunk, lives in conifer forests in the Rockies and several other western mountain ranges.