Invasive in the U.S., lifesaver Down Under

Ten years of research led by the University of South Florida has revealed that a monitor lizard should be regarded as an “ecosystem engineer,” a rarity for reptiles. Tortoises and sea turtles are the only reptiles considered to be ecosystem engineers, a term used to describe organisms that have a great impact on their environment based on their ability to create, modify, maintain or destroy a habitat. Sean Doody, assistant professor and graduate director of integrative biology at the USF St. Petersburg campus, discovered that while a related species is considered invasive in the United States, in Australia, small animal communities rely on the monitor lizards’ burrow system, called a warren, using it as a habitat, a place to forage for food and nesting.

In his study published in “Ecology,” Doody and his Australian collaborators investigated the nesting biology of the Yellow-Spotted monitor lizard, which can measure nearly five feet, and its smaller, sister species, the Gould’s monitor lizard. The team had recently discovered that the lizards are unique in that they lay their eggs as deep as 13 feet, easily the deepest vertebrate nests on earth. They loosen the soil, creating warm, moist conditions, which are ideal for laying eggs and trapping viable seeds and fruits. But now, the researchers have discovered that the burrows hosted a wide range of animals, including reptiles, frogs, insects and even marsupial mammals. The team found 747 individual species of 28 types of vertebrates. 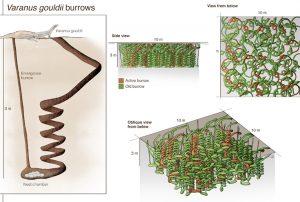 Photo courtesy of the University of Southern Florida.