California’s drought of 2012-2016 killed millions of trees in the Sierra Nevada — mostly by way of a bark beetle epidemic — leaving a forest canopy full of dry needles. A study published from the University of California, Davis, and the U.S. Forest Service helps answer concerns about what effect dense, dead foliage could have on subsequent wildfires and their burn severity.

In the study, published in the journal Ecological Applications, scientists found that the presence of recently dead trees on the landscape was a driver of wildfire severity for two large fires that occurred toward the end of the drought: the 151,000-acre Rough Fire in 2015 and the 29,300-acre Cedar Fire in 2016. 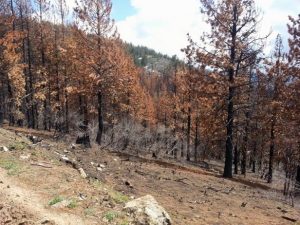 The publication is the first field-based study to document the important role recently dead trees can play in exacerbating fire severity in California forests that are historically adapted to frequent, low-severity fire.