Beating the “billion-dollar bug” is a shared burden 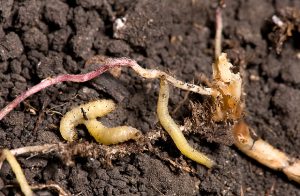 A lurking threat that has stymied US corn growers for decades is now returning to the forefront: western corn rootworm. Sometimes referred to as the “billion-dollar bug,” the species’ tiny larvae chew through the roots of corn plants, causing devastating yield losses. In 2003, farmers began planting a genetically engineered variety of corn known as “Bt,” which produces a protein toxic to the pest species – but by 2009, the billion-dollar bug had already evolved adaptations for resistance to the toxin.

A new study suggests that slowing the resurgence of western corn rootworm may require a larger-scale strategy than previously thought. The findings, which were published in the Ecological Society of America’s journal Ecological Applications, show that when farmers do not follow best management practices for mitigating corn rootworm within a field, they also jeopardize surrounding fields.

Primary author Coy St. Clair and his colleague Aaron Gassmann pinpointed 64 “problem fields” across Iowa, where western corn rootworm had caused greater-than-expected levels of injury to corn between 2009 and 2013 in two varieties of Bt maize: Cry3Bb1 and mCry3A. Compared to fields where rootworm had not damaged Bt maize, the problem fields had higher levels of continuous maize cultivation in surrounding buffer areas. 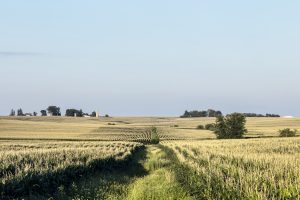 Regular crop rotation is a key strategy for interfering with rootworm’s life cycle: when rootworm eggs hatch in a field without corn, the larvae starve before they have a chance to mature and lay eggs. However, continuous planting of corn tends to be more profitable in the short term, leaving corn growers with difficult decisions about how to manage risks.

St. Clair, now a research entomologist for Genective (Champaign, Ill.) who conducted the research as a Ph.D. student at Iowa State University, says that the story of western corn rootworm resistance to Bt illustrates that pest mitigation is a shared responsibility. “If the pest remains susceptible, everyone benefits. If resistance develops, everyone suffers.”

Continuous maize cultivation gives nascent rootworm populations a chance to evolve resistance to the Bt toxin – and for those newly resistant offspring to travel to other fields.

“The takeaway here is that a farmer who is employing best management practices – such as frequent crop rotation, or planting of non-Bt maize – will effectively manage rootworm and delay resistance in their own field firstly, while simultaneously helping to delay resistance development in surrounding populations secondly,” explained St. Clair. “Conversely, a farmer who is planting multiple years of the same trait will risk resistance in their own field, while contributing to the depletion of the shared resource of trait susceptibility.”

As of 2020, agronomists have confirmed that populations of western corn rootworm resistant to the two Bt traits examined in the study are present across the US corn belt, along with two additional Bt traits.