by Indian Institute of Science, Centre for Ecological Sciences
12/16/2020

In the roughly four billion years that there has been life on Earth, biodiversity has faced mass extinction events only five times. Of the “big five”, the one that has captured our imaginations is the event that wiped out the dinosaurs about 65 million years ago. But scientists believe that a sixth mass extinction is currently underway, and by far the main culprits are human-driven climate change and habitat loss. 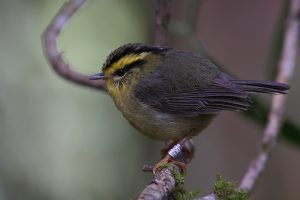 A Yellow-throated Fulvetta (Pseudominla cinerea), one of the study species, with a numbered aluminium ring on its leg. Bird ringing allows us to estimate how survival probabilities change over time because of climate change. This informs effective conservation action that maximises the resilience of species in the face of climate change and habitat loss. Courtesy of Indian Institute of Science.

We investigated the joint effects of climate change and forest degradation on Eastern Himalayan birds. In intact and degraded forest at 2000m above sea level, we tracked how the survivorship of birds changed over time because of climate warming. Like in mountains all over the world, Himalayan bird species occupy different parts of the elevational gradient, depending on whether they prefer warmer (lower elevation) or cooler (higher elevation) habitats. One of the most conspicuous impacts of climate change is that species move upwards in elevation, presumably to track temperatures that suit them best.

In intact forest at 2000m, the annual survivorship of lower-elevation species rose sharply over our eight-year study period – for one species, from a paltry 20% to a more robust 80%. These are species for which climatic conditions at 2000m are likely becoming more suitable over time because of climate change. For higher elevation species, we found the opposite – survivorship declined over time in intact forest, as might be expected for species moving further up and away from 2000m.