Nebraska anglers are creatures of habit

Fishing behavior of Nebraska anglers may be more predictable than previously thought, says a new paper published in the Ecological Society of America’s journal Ecological Applications. Seven fishing spots across the state were visited by loyal communities of anglers throughout the year, with little variation from spring to fall in the home ZIP codes of visitors. 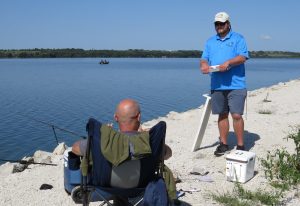 Derek Kane conducts a survey of anglers at Branched Oak Lake near Lincoln, Nebraska, in 2018. Photo courtesy of Mark Kaemingk.

“Our original conceptual model was that anglers are highly mobile and dynamic in their behavior,” said Mark Kaemingk, an assistant professor of aquatic ecology at the University of North Dakota and the paper’s first author. “Our new conceptual model is that anglers, as a whole, could be more predictable than previously thought.”

In Nebraska, fishing has an annual economic impact of over one billion dollars, but keeping track of who is fishing where – and how often – is critical for preventing overexploitation of lakes and reservoirs. 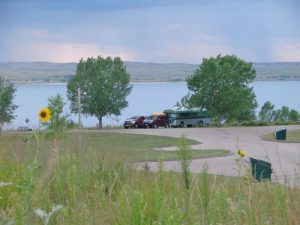 Campsite at Lake McConaughy, a reservoir on the North Platte River. Kaemingk and his colleagues surveyed anglers seven lakes and reservoirs across Nebraska, including Lake McConaughy. Photo courtesy of Vicki Watkins; CC BY-NC-ND 2.0.

The authors had expected that the yearly summertime fishing spike would draw in vacationing families who were willing to travel farther during summer – but were surprised to find that summer anglers were traveling from the same places as those who visited during spring and fall.

The team also found that the pattern held true over the course of the whole four-year study period, with little year-to-year variation in the ZIP codes of angler parties’ home residences.

Kaemingk and his colleagues are not sure whether the lakes were being visited by the same anglers repeatedly, or by different groups from the same ZIP codes – say, families with school-aged children during the summer, and retirees from the same town during autumn. But, Kaemingk says, having a big-picture view of anglers’ traveling patterns can help natural resource agencies make more well-informed management decisions.

“Our previous research has also highlighted that where anglers reside on the landscape can be used to predict on-site behavior at the waterbody, such as harvest propensity,” Kaemingk said.

Changes in participation patterns at a given lake could lead to higher or lower rates of fish harvest over time. This means that data about angler behavior can empower natural resource managers to set regulations that optimize the ecological conditions of a lake as well as creating sustainable fishing experiences for anglers.