A recent paper by researchers at Appalachian State University and Virginia Tech, published in the journal Ecology, titled: “Strong effects of a mutualism on freshwater community structure,” shows how some small worms can influence entire stream ecosystems. The worms are able to have these effects because they are engaged in a mutualism with crayfish which are well known to have strong effects on freshwater systems. This paper documents for the first time that a mutualism may affect the densities of other species in freshwater systems.

Mutualisms are interactions between members of different species that result in positive or beneficial effects on the survival and growth of both species involved. The focal mutualism, in this case, is between a crayfish host and the crayfish worms that live on the shell or exoskeleton of the crayfish. The crayfish worms, as they are commonly known, can increase the crayfish host’s growth and activity.

“A normal number of worms (say 3-6 worms) on a crayfish directly improves the crayfish’s growth and indirectly, via their impacts on the crayfish, influences the abundance of other invertebrate species in the community and the level of sediment that accumulates on the streambed” Dr. Robert Creed, professor, Department of Biology, Appalachian State University said. 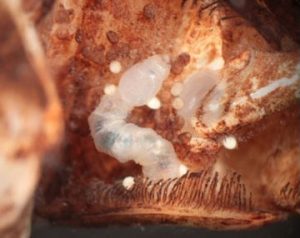 A close up of a worm (Cambarincola ingens) surrounded by its eggs (referred to as cocoons). Photo courtesy of Appalachian State University by Dr. Robert Creed.

Crayfish can affect freshwater systems by eating various invertebrates and plants, both living and dead, as well as by bulldozing and excavating bottom sediments. A variety of species crayfish worms, formally known as branchiobdellidans, live on the exterior of crayfish species found across the northern hemisphere. Thus, it is likely that similar effects of these worms may occur in lakes and streams around much of the world. 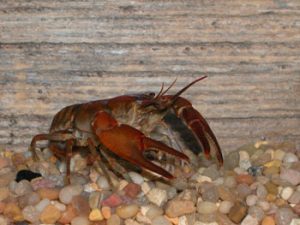