Leaf microbiomes are a neighborhood affair in northern forests

Forest leaves are teeming with bacterial life – but despite the vast extent of bacteria-covered foliage across the world, this habitat, known as the phyllosphere, remains full of mysteries. How do bacteria spread from tree to tree? Do certain types of bacteria only live on certain types of trees? A new paper published in the Ecological Society of America’s journal Ecological Monographs addresses some of these questions. The findings reveal that the leaf microbiomes of sugar maple trees vary across the species’ range, changing in accordance with the types of trees in the surrounding “neighborhood.”

Geneviève Lajoie, now a post-doctoral researcher at the University of British Columbia and the paper’s lead author, performed the research as a Ph.D. student at the Université du Québec à Montréal. She and her field assistant spent a summer in hot pursuit of bacteria-covered foliage, camping at remote parks and rushing to get their leaf samples back to the lab for analysis before new conditions altered the leaves’ resident microbes.

The team sampled foliage at sites across Québec, Ontario and the northeastern United States. Lajoie’s analysis zeroed in on the iconic sugar maple – a species that is abundant at the southern end of the study range, but tapers off at more northern latitudes where conifers dominate the landscape. In fact, at the northern reaches of the study range, at sites like Monts-Valin National Park, sugar maples become anomalous enough that tracking them down among their evergreen neighbors was a challenge. 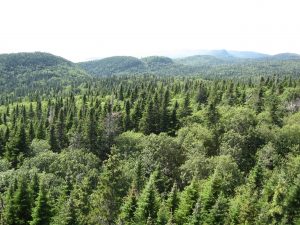 “To reach the site, we drove up north from Québec City and witnessed the gradual transition from the mixed deciduous forest of the Saint Lawrence Valley to a boreal landscape dominated by conifers,” Lajoie said. “Going sampling over the next days, we were looking for sugar maple populations – our focal species. Even though we knew it could be found in the park despite it being the northern limit of its range, encountering these beautiful trees seemingly out of place but still thriving were particularly amazing moments for me.”

However, despite being outliers on a conifer-dominated landscape, these northernmost sugar maple trees had adopted leaf microbiomes that blended in with their coniferous neighbors. LaJoie found a pattern along the latitudinal gradient of her study area: southern sugar maples, which are surrounded by lots of other sugar maples, tended to share a relatively similar microbiome – one that was distinct from other tree species in the area. But in more northern areas, where sugar maple trees are few and far between, the species hosted bacterial communities that resembled the microbiomes of other more dominant species. 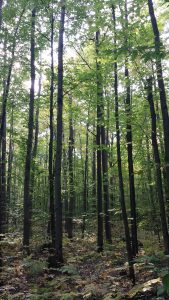 The observations echo similar patterns that have been observed among animal microbiomes. Ground-dwelling animals, for instance, tend to have relatively similar microbiomes, possibly through increased contact with the feces of other animals, while canopy-dwelling animals have gut microbiomes that are less similar to each other.

While gut microbiomes are a hot research topic in the human health sciences, the forest phyllosphere remains a study system that is not well understood – and according to Lajoie, the fields of plant ecology and microbiology have been growing mostly in parallel for many years. This study’s findings provide a more complete picture of the plant–microbe relationship: what kinds of bacteria go on which trees, and how this pattern varies depending on how well a tree fits in with the crowd.