by Nancy Bazilchuk, Norwegian University of Science and Technology
10/29/20

Agriculture is eating into areas that are important in protecting some of the most biologically diverse places on the planet. Most of this new agricultural land is being used to grow cattle feed.

Between 1992 and 2015, the world’s most biologically diverse places lost an area more than three times the size of Sweden when the land was converted to other uses, mainly agriculture, or gobbled up by urban sprawl. 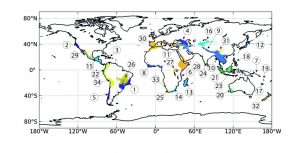 Biologists have identified 34 areas on the globe where biodiversity is both extremely high and at risk. Map: Francesco Cherubini/NTNU. Photo courtesy of Norwegian University of Science and Technology.

These losses all occurred in what are called “biodiversity hotspots”, or 34 areas scattered across the globe that contain “exceptional concentrations of endemic species that were undergoing exceptional loss of habitat,” according to the originators of the idea. To be considered a hotspot, an area must have already lost as much as 70 percent of its primary vegetation and yet still remain home to least 1500 species of plants found nowhere else on Earth.

Read the Frontiers in Ecology and the Environment Paper: https://esajournals.onlinelibrary.wiley.com/doi/10.1002/fee.2276