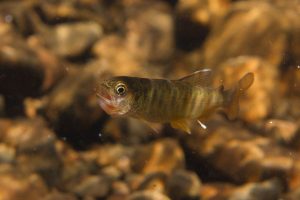 Researchers from Simon Fraser University’s Salmon Watershed Lab have found when salmon returns are high, smaller and less dominant fishes get a chance to feast on their eggs.

For their study, published in the journal Ecosphere, SFU PhD candidate Colin Bailey and biological sciences professor Jonathan Moore experimented with adding between six and 3,575 pink salmon eggs to different stretches of the Keogh River on Vancouver Island.

To determine which species and what sizes of fish were eating the salmon eggs, fish were captured, lightly anesthetized and their stomachs flushed. They were placed in a recovery container in the stream before being released back into the river. This also helped the researchers to see how the sudden abundance of food was disrupting the normal dominance hierarchy among stream fishes.

The researchers found that less dominant fish, such as young Coho salmon and small steelhead trout, and bottom-dwelling sculpins benefited from large quantities of salmon eggs in these experiments.