MSU researcher poses the question – what is the future of the Amazon forest? 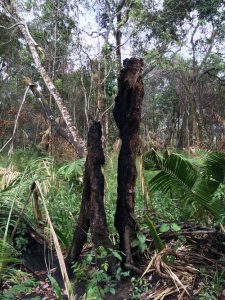 A tree burned in large-scale fires that occurred during a major Amazon forest drought in 2015/2016. This tree had been on the border of a savanna-to-forest transition zone in Alter do Chão, Santarém, Pará, Brazil.

EAST LANSING, Mich. – Tropical ecosystems in the Amazon are threatened by deforestation, fire and drought. Over time, these disturbances may end up permanently changing forests into savanna-like areas, which could have devastating long-term effects globally.

“You can either have forest or savanna in the same climate and rainfall regions. The main thing that keeps these distinctively different from one another is fire. Savannas exist when there is periodic fire.” said Stark. “To reduce global warming, it is better to have tropical forests stay forests rather than turn into tropical savannas.”

As climate changes, Stark wants to determine if a tropical forest will stay a dense forest or turn into an open savanna. He is studying the factors that decide whether tropical forests will be converted into savanna in the long run. This question has a history in forest ecology, but the need to combat climate change by preserving forests makes it much more important now to predict precisely these transitions of forest to savanna.

The problem, Stark said, is what ecologists call “disturbance.”

“Disturbances include droughts, which get worse from climate change. Droughts and other disturbances kill trees, and you certainly expect that will help give the forest a nudge towards turning into a savanna,” he said.

Other disturbances are directly caused by humans, like partial “selective” logging, or clear cutting the forest and then later leaving it fallow to natural vegetation. Fires set to manage cleared land also can burn into nearby Amazon forests during the dry season and cause disturbances.

“Fire in old-growth Amazon forests is kind of shocking,” said Stark. “These are rainforests with no real history of natural fire, and so you can imagine that some trees are likely to die after having their trunks damaged by fire. We don’t really know what the consequence of this is for the future of the forest because of all of these new pressures now faced by the forest.”

Read the paper in Ecosphere: https://esajournals.onlinelibrary.wiley.com/doi/10.1002/ecs2.3231 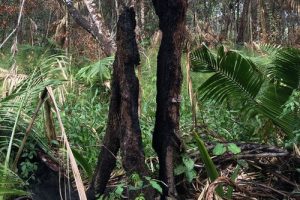