Scorpions a clue to restoring ecosystems 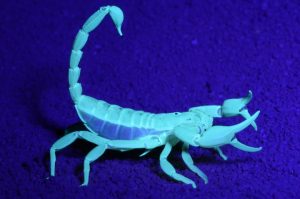 “Were they always so abundant or might this plethora of scorpions be the result of wiping out other species from the ecosystem?”

European arrival in Australia resulted in large-scale loss of native mammal species, largely through predation by introduced cats and foxes.

Re-introducing threatened native mammals – particularly digging species such as the bilby – may be a crucial piece of the puzzle in restoring those damaged ecosystems.

“The Mallee in particular can seem extremely harsh and even lifeless in the heat of summer days, but it comes to life at night, with geckos, spiders, scorpions and many other nocturnal animals,” Associate Professor Gibb said.

“Large native scorpions, up to 9 cm in length, are really abundant in the Mallee and they play a big role as predators of other, smaller, species.  In the Australian Wildlife Conservancy’s Scotia Sanctuary in western NSW, where we conducted our research, we find up to 600 scorpion burrows per hectare, pocking the landscape.”

In research published in Ecology, Associate Professor Gibb’s team found scorpion numbers plummet in the presence of native mammals, such as bilbies, which are a surprisingly important predator. The team’s experiments mimicking soil disturbance by native mammals also led to scorpion population decrease.  Further, mammals were associated with declines in another important group of predatory invertebrates (spiders), which are known to regulate insect populations.

Read the paper in Ecology: https://esajournals.onlinelibrary.wiley.com/doi/10.1002/ecy.3191