by the University of Tuscia

Read this release at UNITUS: https://www.unitus.it/it/unitus/media-e-comunicazione/articolo/press-release

Radiocarbon dating of five large and potentially old sessile oaks from Aspromonte National Parks revealed a long lifespan ranging from 934 ± 65 to 570 ± 45 years. For a long time, majestic oaks have been considered a symbol of longevity and this study proves that a millennium age horizon is an attainable longevity  in angiosperms growing at high-elevation belt in Mediterranean mountains of South Italy.

“Studying the longevity of trees in response to climate change under different environments is a research priority for both nature conservation and climate change mitigation strategies” says Gianluca Piovesan from University of Tuscia, Dafne. “For a long time, majestic oaks have been considered a symbol of longevity. In a study just published in the journal “Ecology”, we dated five large and potentially old sessile oaks from Aspromonte National Parks using radiocarbon, revealing unexpected long lifespan ranging from 934 ± 65 to 570 ± 45 years.

“The sampling was arduous for two reasons” say Jordan Palli and Michele Baliva from DendrologyLab, University of Tuscia: “Firstly, these ancient trees stand on steep rocky slopes that are difficult to reach and to walk through. Secondly, very old individuals are often rotten or hollowed in the inner part of the stem, given the centuries of exposure to the elements and to natural pests and pathogens”. This means that the oldest rings were often missing or severely degraded, challenging the identification and collection of the closest tree-rings to the pith for radiocarbon-dating. In the DendrologyLab we carried out a careful stereoscope screening to identify the oldest rings in our samples” add Michele Baliva and Jordan Palli, “given the very narrow size of the rings, we had to use a scalpel to collect them”.

Demeter: the oldest dated hardwood tree in the temperate and boreal regions One of the largest and oldest sessile oak of the Aspromonte National Park. The tree with a diameter of 195 cm is around 570 years old. It is in the State Reserve Alto Aspromonte managed by Carabinieri Forestali. Photo courtesy of Gianluca Piovesan.

The oldest tree, nicknamed Demetra, alongside the other old oaks, proves that a millennium age horizon is attainable for angiosperms growing in steep, rocky slopes of high-elevation Mediterranean mountain belt. The extreme age of Demeter makes it the oldest dated temperate hardwood tree in the world, expanding the known maximum longevity by more than 300 years for cross-dated hardwood trees (two 620 years old beech trees discovered two years ago in the the Pollino National Park and nicknamed Michele and Norman)  and 200 years comparing radiocarbon calibrated ages (two English oaks from Romania). With its very slow mean annual radial growth (0.4 mm/yr) and smallest diameter among the sampled trees, Demeter confirms the growth-longevity trade-off commonly described for the evolution and expression of life-history traits. The discovery of Demetra and of the other old oaks, close the trilogy of the oldest dated conifers (eg, one Pinus Heldreichii, nicknamed Italus) and hardwoods (Michele and Norman) in Europe. The articles have been published in the section Scientific Naturalist of the journal Ecology. All these trees live in the mountains of south Italy between the Pollino and Aspromonte National Parks. “The discovery of these long-lived sessile oaks in the high-elevation mountain environment of Aspromonte confirms the high level of naturalness of forest ecosystems in protected areas of the southern Apennines” says Antonino Siclari from the Aspromonte National Park. Aspromonte, Sila and Pollino National Parks are located in the southern part of the European Mediterranean region, a biodiversity hotspot for forest conservation. Here, the strict nature reserves will preserve the old-growth forests and associated threatened species that require very old habitat trees of conifers and angiosperms (eg, Buprestis splendens or Osmoderma italicum, respectively).

“What is increasingly emerging is that mountain forest ecosystems in temperate and boreal regions, where the oldest trees on Earth live, have a relevant conservation value underlining the need for mapping  forest ecosystem of high naturalness all over the world in order to protect them and achieve the goals of the United Nations Agenda 2030 for sustainable development” says Gianluca Piovesan. The strategic role played by mountain protected areas for biodiversity conservation in temperate regions is now evidenced by the Italian Mountain Lab research project, too.

Demetra was painted by Mery Rigo. Artists can play a cultural transformation role in society by helping to raise awareness on nature protection and to engage people in conservation messaging. Preserving biodiversity is a requirement for sustainable development, and the long-life cycle of Aspromonte oaks is a reminder of the need to leave adequate space for natural processes to take place. “As Michelangelo Pistoletto affirmed – says Mery Rigo – nowadays art can and must have an active role in promoting an utterly new and correct relationship between mankind and nature. Portraying Demetra – with a particular technique based on painting, photography and digital processing – was a great emotion for me and with my intervention I hope to have made a little contribution to the cause”.

Radiocarbon dating analyses were carried out at CEDAD- Centre for Applied Physics, Dating and Diagnostics, the AMS (Accelerator Mass Spectrometry) facility at the University of Salento in Lecce, Italy. “The use of the radiocarbon dating method allowed us to assess the absolute age of the trees with a high degree of accuracy while advanced statistical tools for data analysis helped us to improve the achieved chronological resolution” says Gianluca Quarta, professor of Applied Physics at CEDAD.

Aspromonte is located in the middle of the Mediterranean basin a key area for climatic reconstructions. “An additional ecological value of old forest such as the one in Aspromonte is that they can be used to track-back the environmental history of the area. The information contained in tree rings can be decoded and use to interpret how environmental influences, particularly climate, shaped forest structure and function and this is the next step we are taking with Aspromonte oaks” adds Isabel Dorado-Liñán.

“These long-lived trees are witnesses of our past. The history of our climate, of solar activity, of the human impact on the environment is registered in their rings and we are sure that other important discoveries are going to come” concludes Lucio Calcagnile, Director of CEDAD. 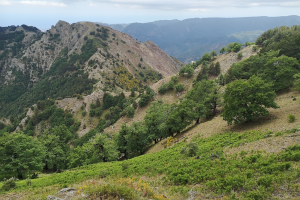