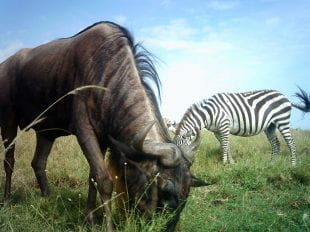 Wildebeest and zebra graze together in this camera-trap photo from Tanzania’s Serengeti National Park. The photo is one of more than 115,000 camera-trap photos from the Snapshot Serengeti project that were used in a study of mixed-species grazing. Photo courtesy of snapshotserengeti.org

Meals are typically family affairs for zebras, gazelles, cape buffalo and other grazing species in the African Serengeti, but in one of the first studies of its kind, ecologists have found grazing species can be more willing to share meals in areas frequented by lions.

The study, which is available online this week in the journal Ecology, was conducted by a team from Rice University, Princeton University, Wake Forest University and the University of Minnesota. They analyzed more than 115,000 camera-trap photos to see where, when and how often six of the Serengeti’s most abundant grazing species — cape buffalo, gazelle, hartebeest, topi, wildebeest and zebra — formed mixed-species groups.

“The mixed-species groups occur near places where lions like to hunt, which suggests the grazers are trying to reduce their chances of being killed by predators,” said Rice lead-author Lydia Beaudrot.

Mixed-species groups of grazers were found in 1.9% of the camera-trap photos, which were collected between 2010-2015 in Tanzania’s Serengeti National Park and processed by volunteers for the citizen science website snapshotserengeti.org. Camera-trap findings were combined with information from long-term GPS collar monitoring by the Serengeti Lion Project and satellite imagery that showed both the location of hunting areas favored by lions and where and when food was plentiful or scarce for grazers. 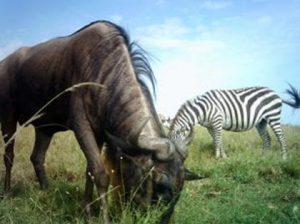