A new study suggests that future reductions in seasonal snowpack as a result of climate change may negatively influence forest growth in semi-arid climates, but less so in wetter climates.

Researchers from Portland State University, U.S. Geological Survey, U.S. Forest Service and the universities of Vermont and Maine found that forest density and snowpack can influence drought stress and forest growth in ways that are important to recognize for managing forests in a changing climate.

The study — led by Kelly Gleason, assistant professor of ecohydrology at PSU — found that forest growth in water-limited, dryland areas is likely to be most dramatically impacted by snowpack reductions. In these semi-arid climates, reduced snowpack may negatively influence forest growth and may increase tree mortality. This was only exacerbated in high-density forests.

“Forests are a lot more vulnerable because of increasing density,” Gleason said. “More trees are sharing the same amount of water, and there’s less water over time because of climate change impacts.”

She said that in arid climates like much of the western U.S. where water availability is driven by snow, reducing forest density through thinning will improve the resilience of these forests amid a changing climate.

By contrast, the study found that in wetter climates like Minnesota, reduced snowpack as a result of future warmer winters may positively influence forest growth, potentially by extending the growing season. The study found that in these forests, thinning would have less of an impact on the snowpack-growth relationship. 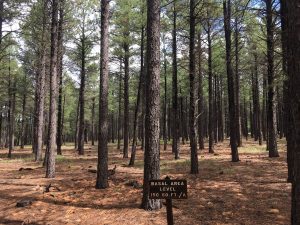