Where Are Arctic Mosquitoes Most Abundant in Greenland and Why? 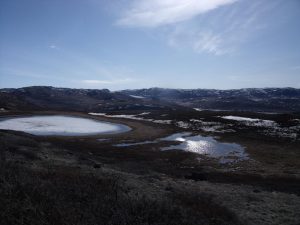 Aquatic habitats in Kangerlussuaq, Greenland. Arctic mosquito larvae grow and develop in the shallow ponds (on the right) but not in the deeper lakes (on the left). The large pond on the right was estimated to have 12.4 million newly hatched mosquito larvae in 2018. Photo by Lauren Culler.

Bzz! It’s mosquito season in Greenland. June and July marks the period when Arctic mosquitoes (Aedes nigripes) are in peak abundance, buzzing about the tundra. While Arctic mosquitoes serve as an important food source to other animals, they are notorious for their role as pests to humans and wildlife, including caribou, whose populations can be affected by their attacks. Yet, these mosquitoes spend most of their lives in an aquatic environment in shallow, tundra ponds. Their eggs become frozen in the winter and hatch into larvae when the ponds melt in the spring. Arctic mosquitoes spend about two to three weeks in the larval stage before they develop into pupa and then adults. Given that Arctic mosquitoes’ annual abundance and ecological role remains poorly understood, Dartmouth researchers set out to understand where they are most abundant during the larval stage and why. According to the study’s findings, Arctic mosquito populations appear to be driven by food quality rather than predator density. The results are published in Ecology.

As larvae, Arctic mosquitoes feed on microbial biofilms that are attached to detritus, dead organic matter in the ponds. Using a food web approach, in May and June 2018, Dartmouth researchers investigated how variation in the food quality (bottom up approach), the predaceous diving beetle (C. dolabratus) (top down approach) and other conditions such as temperature and nutrients, affected the larval population. The study sample was comprised of eight different ponds between Kangerlussuaq, Greenland and the margin of the Greenland Ice Sheet.

To measure biofilm productivity, the team used “biofilm samplers,” which were left in the ponds for the microbial material to accumulate. Arctic mosquito larvae had access to some of the devices as a food source while others were intentionally blocked off, so that the biofilm could not be eaten. The researchers looked at how much biofilm the larvae consumed and conducted a lab analysis of what the microbial community was composed of.

The researchers had hypothesized that Arctic mosquitoes do not make it to the larva stage because they either do not have enough to eat or they are consumed by the diving beetle. They were surprised by the results. The ponds with the best food quality had the lowest population growth rates, as the mosquitoes tended to overcrowd these sites. These sites had the highest hatching mosquitoes, resulting in intense competition for food and poor survival. In contrast, ponds with lower food quality had higher population growth rates. “Arctic mosquito populations appear to be driven by what they are eating rather than who is eating them,” explained first author, Melissa H. DeSiervo, a graduate student in the Ecology, Evolution, Environment and Society program at Dartmouth.