Armies of king crabs may be poised to invade the Antarctic. 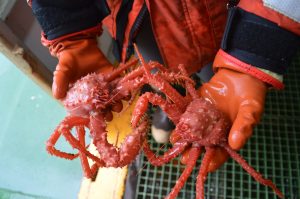 An Antarctic king crab (Paralomis birsteini; family Lithodidae), retrieved from the seafloor and measured as part of the ongoing research. Photo courtesy of R.B. Aronson, J.B. McClintock, and the National Science Foundation.

A new study published in the Ecological Society of America’s journal Ecology, the culmination of more than 15 years of research, sheds light on king crabs’ natural history and implies that they may be poised to colonize naïve ecosystems.

In 2005, biologist Sven Thatje posited that as the world warmed, there was theoretically no reason that a species of king crab, Paralomis birsteini, should not live in the shallow waters of Antarctica, where crabs have not lived for at least 16 million years.

Thatje and his colleagues, an international collaboration of scientists from the University of Southampton, Florida Institute of Technology and the University of Alabama at Birmingham, have studied Antarctic king crabs for the last decade and a half. They took close to 100,000 photos of the seafloor, then analyzed the photos to understand what these crabs eat, how they hunt, when and how they reproduce and other facets of their behavior, including aggregation and molting frequency.

“The past ten years, step by step, we have brought the story together,” says lead author Sven Thatje. “Fifteen years ago, when I published the first paper, it was theoretical, based on physiological data. We did not have many records of king crabs in Antarctic waters at all.” 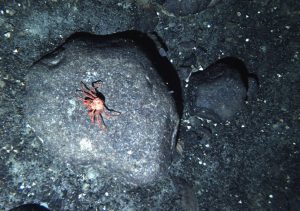 The research team took more than 200,000 photos of the Antarctic seafloor to study the natural history of king crabs.
Photo courtesy of R.B. Aronson, J.B. McClintock, and the National Science Foundation.

He and his team discovered that Antarctic king crabs live life in the slow lane. Compared to their relatives living in warmer seas, they grow more slowly, mature more slowly, even move more slowly. It is hypometabolism — metabolism taken to the slowest survivable extreme. They lay fewer eggs, but spend more resources investing in the larvae. Many crab species, including shore crabs and edible crabs lay between two and three million eggs. Antarctic king crabs lay between two and three thousand. And those eggs take two years to hatch—compared to an incubation of a few months in more temperate waters.

“They grow very slowly,” Thatje says. “It may take up to 24 for them to mature. They molt once every two years. They probably live to be very, very old — potentially 40 years old or older.”

The crabs are living at the lower limit of the temperatures they can stand. Cold surface water temperatures used to keep them confined to the deeper waters. But as the oceans warm, that lower limit threshold moves. Warmer water creeps slowly up the Antarctic continental slope and shelf, allowing the king crabs to move with it.

“It is rare for an ecologist to see their theories proved in their lifetime,” Thatje says. “We are witnessing this change in real time. It is much more rapid than I had ever anticipated.”

That rapid change may spell destruction for some Antarctic shelf ecosystems that have evolved in the absence of major predators for at least 16 million years. The king crabs may devastate the unique filter and suspension feeder communities by preying on them, potentially changing the very structure of the ecosystems.

Thatje and his team will track those changes, as well as continue to study the genetics, demographics, and physiology of these king crab species.