Invasive hedgehogs and ferrets habituate to and categorize smells

To catch a thief, the saying goes, you have to think like a thief. The same is true for invasive predators: to foil their depredations on native wildlife, scientists have to understand how they think. 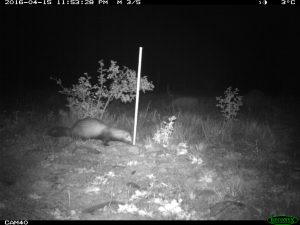 A wild ferret investigates bird scent in a jar. Researchers used cameras to monitor predators nightly interest in bird odor. Ferrets hunt primarily rabbits, but will eat eggs or chicks if they find them. Photo courtesy of Grant Norbury.

A new study published in the Ecological Society of America’s journal Ecological Applications examines how invasive mammalian predators both habituate to and generalize avian prey cues. Dr. Price and her team at Manaaki Whenua Landcare Research studied the behavior of ferrets and hedgehogs—invasive mammals in New Zealand—in an outdoor enclosure experiment to understand how they hunt avian prey. The discovery could have conservation applications for protecting native bird species.

Previous research has established that “chemical camouflage” could be an effective way to deter invasive species from harming vulnerable bird populations: scientists can distribute appealing bird odors near nests before eggs appear, so that the predator eventually starts ignoring the smell—even after tasty eggs become available.

This study goes a step further, showing that invasive predators not only learn to pinpoint (or ignore) certain smells that are associated with food—they can also classify similar smells into groups. 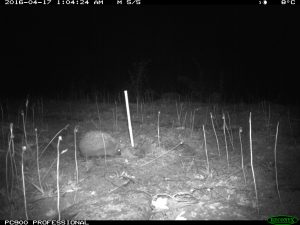 A wild invasive hedgehog is attracted to bird odor in a jar. Hedgehogs mainly consume invertebrates but eat eggs and sometimes chicks of ground-nesting birds. Photo courtesy of Grant Norbury.

“We are trying to understand how these predators have been so effective at destroying the native fauna,” says Catherine Price, a postdoctoral research associate at the University of Sydney and the study’s lead author. “We are researching new ways to exploit behavioral patterns and traits to understand why native species are so vulnerable and how to protect them.”

In New Zealand, invasive mammalian predators have devastated local bird populations, especially of the wrybill, double-banded plover, kakī, and black-fronted tern, whose populations nest at the same time and in similar locations. Such nesting colonies are the proverbial sitting duck: with no defenses, small numbers of predators like ferrets and hedgehogs can essentially wipe out nearly a generation with very little effort.

Hedgehogs and ferrets are generalists. Ferrets mainly hunt rabbits but will not turn down an easy meal of eggs or chicks. Hedgehogs eat mostly invertebrates and berries but also love eggs, especially right out of hibernation when they are especially hungry.

Price wanted to understand how the predators seek out bird colonies. While humans are primarily visual, many other animals—including ferrets and hedgehogs—draw more information from other senses, including their sense of smell.

“Because humans aren’t olfactory species, we don’t often think about odor,” Price said. “But these predators are very sensitive to odor, and to the costs of odor. They respond very quickly if a hunting tactic—like following a certain odor—isn’t working.”

Price and her team captured local ferrets and hedgehogs and ran them through a series of controlled treatments in outdoor enclosures resembling their natural habitat to examine how these predators categorize smells—whether they group smells of similar types of birds together—and how and whether they habituate to smells. This is the first time this kind of research has been done on these predators in a controlled outdoor setting.

The question of categorization reveals a substantial amount about the hunting strategies and priorities of the predator. Separating smells into individual species requires an investment that might not always be merited. In some cases, it is sufficient for ferrets or hedgehogs to simply sniff out a broad category of prey, such as “ground-nesting bird with eggs this time of year,” but knowing exactly what kind of bird they are smelling is irrelevant.

“The idea that animals are grouping prey together by smell is exciting,” Price said. “We never assumed wild animals did that before, and now we’ve shown that they can do this using smell.”

The team discovered that ferrets generalized the avian smells (in this case gulls and quail) but the hedgehogs did not. In many ways, this makes sense: ferrets consume lots of prey besides bird species, so distinguishing between bird smells may not be worth a ferret’s time or energy. Seasonality may also have played a role. In the experiment, hedgehogs were getting ready to go into hibernation, making them especially motivated to find high-quality meals easily.

This finding indicates it might be possible to protect bird colonies by distributing bird smell around the area. If an entire area were saturated with the smell of a nesting ground species, it could protect a nesting colony. Predators would become accustomed to the smell and ignore it, seeking out other prey.

“Understanding how predators group smell is important because if they generalize, we don’t have to actually put out the smell of the bird we’re protecting; we can put out chicken or quail odors that we can easily get in abundance,” Price said.

Correction:
The original press release posted on 7/15/20 included two captions that were incorrect. The first caption stated that the photo depicted “A wild ferret, captured for this experiment and then released.” The second caption stated: “A wild invasive hedgehog, captured for the duration of this experiment, smells the jar in its enclosure.” However, the captured animals were euthanized to comply with New Zealand laws that prohibit the release of invasive predators.