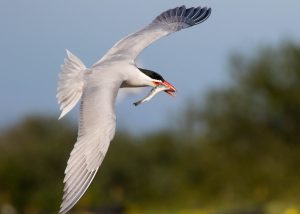 CORVALLIS, Ore. – Caspian terns feeding on young fish have a significant impact on runs of steelhead in the Columbia River, according to a new paper from scientists at Oregon State University.

Through detailed analysis of steelhead survival and Caspian tern predation rates, the researchers found that the birds are not only preying on fish that would perish for some other reason, but are adding to the annual death toll by eating steelhead smolts that would have survived without tern pressure.

In scientific terms, the findings indicate that the terns are having an “additive” effect on prey mortality rather than a “compensatory” one.

The study was published in Ecological Applications.

In the Columbia Basin, 13 of 20 populations of anadromous salmon and steelhead are listed as threatened or endangered under the Endangered Species Act. Caspian terns, a protected migratory bird species native to the region, have been the object of predator management in the Columbia Basin in an effort to protect smolts, especially steelhead smolts, from being eaten before they can swim downstream to the ocean.

The largest breeding colony of Caspian terns in the world was formerly on a small island in the lower Columbia River estuary between Oregon and Washington. It hosted more than 10,000 breeding pairs in 2008, just prior to implementation of nonlethal management to reduce colony size to between 3,125 and 4,375 breeding pairs.

“There has been little research, however, into whether reduced predation actually results in greater overall salmonid survival, either at the smolt stage, where the predation is taking place, or across the lifetime of the fish,” said Oregon State’s Dan Roby, professor emeritus in the Department of Fisheries and Wildlife of the College of Agricultural Sciences. “Without clear evidence that reduced predation means greater survival to adulthood, management to reduce predator impacts would be a waste of time and resources.”