Roadkill study identifies animals most at risk in Europe 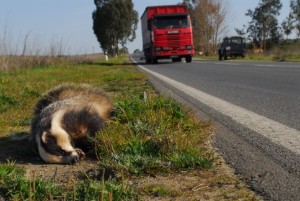 Around 194 million birds and 29 million mammals are thought to be killed each year on European roads, according to a new study that has ranked the most vulnerable species.

An international research team used 90 roadkill surveys from 24 European countries to create a new method of estimating both the birds and mammal species killed most often on roads, and the species most vulnerable to being wiped out of certain areas.

The research, published in Frontiers in Ecology and the Environment, found that the species killed most often were not necessarily the ones most vulnerable to disappearing completely. This means action to preserve wildlife when new roads are built risks being targeted at the wrong species based on current methods.

Dr Manuela Gonzalez-Suarez, an ecologist at the University of Reading, and co-author of the study, said: “Road densities in Europe are among the world’s highest, with 50% of the continent within 1.5km of a paved road or railway. Roads are therefore a significant threat to wildlife, and evidence shows deaths on them could even cause some species to disappear completely.

“Despite this, the long-term vulnerability of species is not currently considered when assessing the impact of new roads on wildlife, meaning we risk channeling support to the wrong species, doing nothing to help those most at risk. Better understanding which species are most vulnerable to roads is therefore important if we are to take more effective conservation action.”

Read the study in Frontiers in Ecology and the Environment here: https://esajournals.onlinelibrary.wiley.com/doi/full/10.1002/fee.2216