Roads threaten millions of birds and mammals in Europe 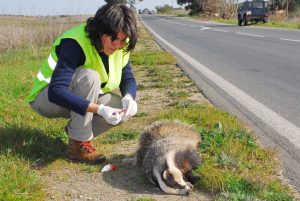 Approximately 194 million birds and 29 million mammals are struck by vehicles each year on European roads, according to estimates by an international team of researchers led by Clara Grilo, from the Center for Environmental and Sea Studies (CESAM) and the Faculty of Sciences of the University of Lisbon. The study was conducted at a research center associated with the University of Aveiro. The results are published in the scientific journal Frontiers in Ecology and Environment.

Rates of collisions with vehicles vary among different species; the researchers explain why. “Birds and mammals with smaller body sizes and characteristics that make them more abundant have a greater number of individuals being hit. For example, blackbirds and hedgehogs showed particularly high collision rates,” explains co-author Manuela González-Suárez, professor at the University of Reading, UK.

The research team also found that species that occur at low densities, such as eagles and bats, can be particularly vulnerable to local extinction, even with few vehicle collisions. “This means that the roads with the highest number of birds and mammals hit do not spatially coincide with the regions that have the highest number of species that, due to roads, are potentially vulnerable to local extinction,” Clara Grilo points out.

Read the study in Frontiers in Ecology and the Environment here: https://esajournals-onlinelibrary-wiley-com.proxy-um.researchport.umd.edu/doi/full/10.1002/fee.2216