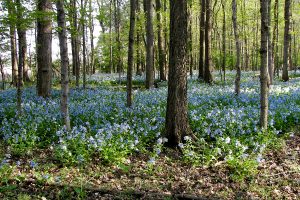 Bluebells in Trelease Woods, Illinois, are blooming 3.2 days earlier per decade since 1993.
Photo by Steve Buck

CHAMPAIGN, Ill. — For 25 years, Carol Augspurger visited a patch of ancient woods near Urbana to look at the same 25 one-square-meter plots of earth she first demarcated for study in 1993. She surveyed the plots once a week in spring and summer, tracking the major life events of each of the herbaceous plants that grew there. In fall, she visited every other week. In winter, once a month.

Over the course of her study, Augspurger made nearly 600,000 observations of 43 plant species in Trelease Woods, a 60.5-acre remnant of old-growth forest in central Illinois. She noted 10 distinct developmental stages in the plants’ lives, including when they emerged in spring, how long it took them to mature, when the flowers opened and died, when the leaves began to lose their greenness and when the plants went dormant. Augspurger is a professor emerita of plant biology at the University of Illinois at Urbana-Champaign.

By tracking these events and their relationship to average daily temperature and precipitation records, Augspurger and her colleague, Illinois Natural History Survey statistician and plant ecologist David Zaya, found that some shifts in the timing of plant seasonal life cycle events correlated with temperature trends.

The findings appear in the journal Ecological Monographs.

“We marked every major life cycle event in our plants from emergence until they went dormant,” Augspurger said. “And we did it for an intact community, a natural forest community.”

The analysis revealed that by the end of the study in 2017, the first spring plants were emerging almost four days later in March than they had in the early 1990s. But their growing seasons were getting shorter: Dormancy was occurring about six days earlier. March average temperatures got slightly cooler over the same time period, but April temperatures were rising.

Plants that emerged in late spring – typically after April 1 – were undergoing even more dramatic shifts. Their growing seasons were lengthening: The period from emergence to dormancy lasted more than 49 days longer for these plants at the end of the study than at the beginning.