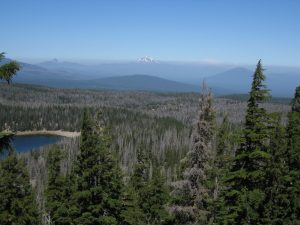 CORVALLIS, Ore. – Pockets of landscape less prone than adjacent areas to disturbances like fire and drought may hold the key for scientists, conservationists and land managers seeking to preserve vulnerable species in a changing climate.

These areas, categorized as “disturbance refugia,” are becoming a focal point for ecologists trying to learn why change doesn’t occur as quickly in some landscapes as it does in others nearby.

“In the Pacific Northwest, the iconic northern spotted owl relies on refugia in the form of old-growth forests,” said Oregon State University forest ecologist Meg Krawchuk. “These forests are refugia from previous stand-replacing disturbances – that’s how they got to be old – but they’re slowly being nibbled away by recent high-severity fires.”

Known informally as the “lifeboats” or “slow lanes” of biodiversity, refugia have spawned the new field of refugia science, which is the theme of the June issue of Frontiers in Ecology and the Environment.

Krawchuk, who contributed to the issue with a study of forest refugia in the combined context of fire, drought and insect outbreaks, says research shows that some locations have inherent characteristics – such as terrain, vegetation, proximity to bodies of water, and slope-face direction – that buffer them from disturbances in a predictable manner.

“Scientists and land managers working together on refugia science and implementation will help to conserve forest landscapes, and biodiversity, here in the Pacific Northwest and around the globe that are dear to our hearts,” Krawchuk said. “Some disturbances are important ecosystem processes that support biodiversity; however, there is increasing worry about the erosion of biodiversity due to the increased frequency, severity and/or types of forest disturbances, and how they overlap.”

Read the study in Frontiers in Ecology and the Environment here: https://esajournals.onlinelibrary.wiley.com/doi/10.1002/fee.2190