Oyster farming as currently practiced along the Delaware Bayshore does not significantly impact four shorebirds, including the federally threatened red knot, which migrates thousands of miles from Chile annually, according to a Rutgers-led study. 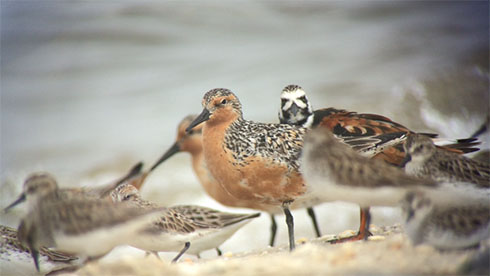 The findings, published in the journal Ecosphere, likely apply to other areas around the country including the West Coast and Gulf Coast, where oyster aquaculture is expanding, according to Rutgers experts who say the study can play a key role in identifying and resolving potential conflict between the oyster aquaculture industry and red knot conservation groups.

“Our research team represents a solid collaboration between aquaculture research scientists and conservation biologists, and we’ve produced scientifically robust and defensible results that will directly inform management of intertidal oysterculture along Delaware Bay and beyond,” said lead author Brooke Maslo, an assistant professor and extension specialist in the Department of Ecology, Evolution, and Natural Resources in the School of Environmental and Biological Sciences at Rutgers University–New Brunswick.

Aquaculture is a burgeoning industry along the Delaware Bayshore, infusing millions of dollars into local economies annually, and the production of oysters within the intertidal flats on Delaware Bay has grown in the last decade.

Although a relatively small endeavor now, rising public interest in boutique oysters for the half-shell market (known as the Oyster Renaissance) and the “low-tech” nature of oyster tending make oyster farming an attractive investment for small-business entrepreneurs.