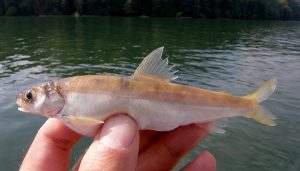 In Lake Constance, Eawag scientists have tracked down a charr species thought to have gone extinct – a surprising rediscovery raising numerous questions.

The deepwater charr Salvelinus profundus is a small, pale fish endemic to Lake Constance. With its large eyes and overbite, it is well adapted to life in the depths, where it feeds on bottom-dwelling worms and crustaceans. Up until the 1960s, it was a commercial species, but catches subsequently declined with the eutrophication of Lake Constance. As nutrient levels increased, oxygen was depleted in deep waters, and the eggs of this deep‑spawning fish were no longer able to develop properly. In the late 1990s, when phosphorus levels had been reduced and the lake was returning to a more natural state, the International Union for the Conservation of Nature (IUCN), with support from local research institutions, tried to detect this species. However, after a decade of fruitless sampling efforts, S. profundus was declared extinct in 2008.

“But then, in 2012, we got a call from a colleague at the University of Konstanz,” says fish biologist Carmela Doenz, a doctoral student at the University of Bern and the Eawag Centre for Ecology, Evolution and Biogeochemistry in Kastanienbaum: a single small fish matching the description of the extinct charr had been caught. Doenz recalls: “This news made us hopeful that the species might have survived after all, but we remained cautious, as on several previous occasions individuals of another species had been incorrectly identified as Salvelinus profundus.”

Two years later, when the fish diversity of Lake Constance was to be investigated as part of “Project Lac”, Carmela Doenz and her supervisor Ole Seehausen (Professor of Aquatic Ecology & Evolution at Bern University) set two additional nets to target the deepwater charr. Doenz had found an old sketch map indicating the precise location where the last specimens had been caught in 1972. To their surprise, they caught seven deepwater charr at this location, and another during the large fishing campaign. “Happily, those weren’t the only specimens found,” says Doenz. “The fish has since been seen now and then in catches, but we can’t currently estimate the size of the population.”