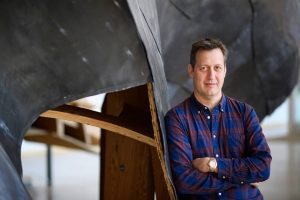 Jonathan Levine, a professor of ecology and evolutionary biology (EEB), is the 2020 recipient of the Ecological Society of America’s Robert H. MacArthur Award, the most prestigious mid-career accolade from the world’s largest professional organization of ecologists, representing more than 9,000 scientists around the world.

Levine is the 20th winner of the award, which was established in 1983 in memory of the pioneer theoretical ecologist Robert MacArthur, who spent his most productive years at Princeton.

“MacArthur, along with Henry Horn, established Princeton as the leading center in the world for theoretical ecology linked closely to empirical work,” said Lars Hedin, EEB chair and the George M. Moffett Professor of Biology. “It is therefore especially fitting to have this year’s award bestowed upon one of our own faculty members.”

In its award announcement, the Ecological Society of America noted the research links between the award’s namesake and its latest recipient: “Following the legacy of Robert MacArthur, Levine is a master at revealing simple mechanisms underlying complex patterns. A hallmark of his work is highly controlled experiments that make it possible to link theory and data, thereby exposing the fundamental processes regulating complicated systems. His work has given both inspiration and guidance to the field of ecology. He has also served the field by training a new generation of ecologists, whose collective successes have been remarkable.”

Levine, who is also an associated faculty member with the Princeton Environmental Institute, will receive the award in early August at this year’s Ecological Society of America meeting, which will be held either partially or entirely online, and he will deliver his award lecture at next year’s annual meeting. A paper based on his lecture will appear in the journal Ecology.