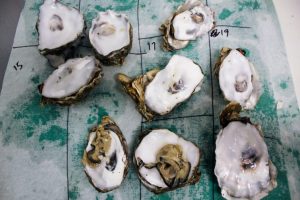 Empty Pacific oyster shells are placed on a mat after being sampled. The effect of acidified waters on multiple generations of Pacific oysters can influence aquaculture in Washington and globally. Photo Credit: Yaamini Venkataraman/University of Washington

As oceans absorb more carbon dioxide, they are becoming increasingly acidic and shifting the delicate balance that supports marine life. How species will cope with ocean acidification and the other consequences of global climate change is still very much unknown and could have sweeping consequences.

Researchers from the University of Washington School of Aquatic and Fishery Sciences have discovered that ocean acidification impacts the ability of some oysters to pass down “memories” of environmental trauma to their offspring.

The two papers were published in December in Ecological Applications and the Journal of Shellfish Research.

“Warming and acidifying oceans negatively influence many marine species. However, some species that live in extreme environments, such as the intertidal, may be more resilient than others to these changes,” said Laura Spencer, one of the two lead authors and a graduate student in aquatic and fishery sciences. “Some species may even be able to pass on memories of harsh conditions to their offspring, making them more capable of surviving in similarly harsh environments.”

Researchers studied two species of ecologically and commercially valuable oysters found throughout Puget Sound: the Olympia oyster and the Pacific oyster. Although oyster larvae are sensitive to acidifying oceans, adult oysters commonly occur in intertidal areas and estuaries where they must endure constantly fluctuating water conditions.

It is this hardiness that has researchers hopeful that oysters can withstand an increasingly acidic ocean. If their resilience to stressors can be passed down to their offspring, it could promote an increased tolerance among the future population.