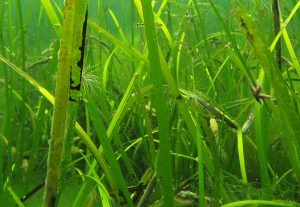 Eelgrass meadows i Gullmarsfjorden on the Swedish coast. Photo. Credit: University of Gothenberg

Researchers have used a new method to identify which eelgrass meadows on the Swedish coasts are particularly vulnerable or valuable and which meadows should be restored in the future.

Eelgrass (Zostera marina) is a marine flowering plant that provides a habitat for a wide range of marine plants and animals, including several commercial fish, such as cod.

Now an international research group led by researchers from the University of Gothenburg has developed a new method for evaluating which eelgrass meadows are the most sensitive and which meadows have the greatest importance for future survival.

Important for animals and humans

Eelgrass grows on shallow soft bottoms in the northern parts of the Atlantic and Pacific Oceans.

It plays an important ecological role along the Swedish coasts in the North Sea and the Baltic Sea.

“Eelgrass has a unique role. It stabilises the seabed, improves water quality and absorbs nutrients and carbon from the water, providing us with a number of important ecosystem services,” says Marlene Jahnke, lead author and a researcher at the Department of Marine Sciences.

According to the researchers, the new method, which takes into account dispersal and genetic diversity of eelgrass, can offer ways to improve management of threatened meadows.

Through this method, researchers have identified networks of eelgrass meadows that together provide high survival and maintain high genetic diversity. This increases the likelihood that eelgrass can tolerate future environmental change.