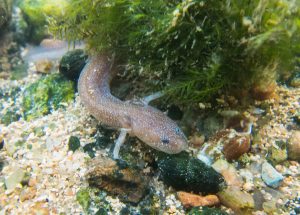 A new tool to help protect vulnerable species such as the Eurycea sosorum salamander found near Austin, Texas, identifies some of the most cost-effective conservation bargains in the US. Photo Credit: Nathan Bendik, City of Austin, NIMBioS

Conserving natural habitat around strawberry fields can help protect growers’ yields, their bottom line and the environment with no detectable threat to food safety, indicates a study led by the University of California, Davis.

KNOXVILLE—The best bargains for conserving some of the world’s most vulnerable salamanders and other vertebrate species can be found in Central Texas and the Appalachians, according to new conservation tools developed at the National Institute for Mathematical and Biological Synthesis (NIMBioS) at the University of Tennessee, Knoxville.

The study involves a suite of computer algorithms that surf across many different kinds of data to create maps of top priorities and projections of what species would benefit the most from increases in conservation dollars.

An interdisciplinary team of computer programmers, biodiversity data scientists, conservation decision makers, economists, and others from around the globe convened at NIMBioS to develop the optimization tool, which was published in the journal Ecological Applications.

Determining where the best protection payoffs are to be found has traditionally been a challenge for conservation, especially when budgets are stretched thin.

“The challenge for conservation practitioners is how to best combine many really disparate kinds of data and do so in a way that lets them compare possible options for protection—the goal being to find opportunities where conservation efforts offer the greatest bang for the buck,” said the study’s lead author, UT Professor of Ecology and Evolutionary Biology Paul Armsworth.