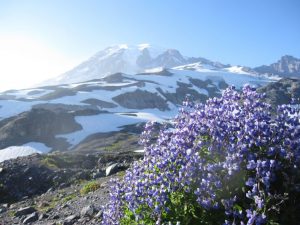 Spring is coming, and with it comes the promise of warmer weather, longer days and renewed life.

For residents of the Pacific Northwest, one of the most idyllic scenes of this renewed life is the wildflowers that light up Mount Rainier’s subalpine meadows once the winter snowpack finally melts. These floral ecosystems, which typically arrive in summer, are an iconic feature of Mount Rainier, and a major draw for the more than 1 million tourists, hikers and nature-lovers who visit the national park each spring and summer.

But without cuts to our carbon emissions, by the end of this century, scientists expect that snow in the subalpine meadows will melt months earlier due to climate change. New research led by the University of Washington shows that, under those conditions, many visitors would miss the flowers altogether.

The research team made this discovery using crowd-sourced photos of Mount Rainier’s subalpine meadows taken from 2009 to 2015 and uploaded to the photo-sharing site Flickr. As they report in a paper published in Frontiers in Ecology and the Environment, 2015 was an unusually warm, dry year when snow melted and disappeared from the meadows about two months earlier than usual. As a result, wildflower season was shorter and arrived earlier. But Flickr photos showed that visits by people to Mount Rainier in 2015 peaked later than the flowers, after the height of wildflower season.

Read the article in Frontiers: https://esajournals.onlinelibrary.wiley.com/doi/abs/10.1002/fee.2142