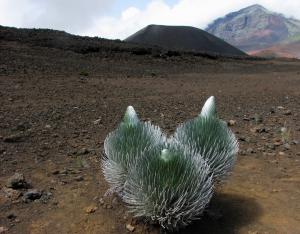 Haleakalā silverswords grow where few other plants can. Photo Credit: University of Hawai’i at Manoa

The Haleakalā silversword, already one of the rarest species in the Hawaiian Islands, has been declining in recent decades due to drier and warmer climate conditions. Efforts to restore the population should focus on outplanting new plants in geographic areas with the most favorable climatic conditions. That’s according to a three-year study by researchers from the University of Hawaiʻi at Mānoa’s College of Tropical Agriculture and Human Resources and the UH Botany Department.

“The goal of our study was to understand the specific reasons why silverswords are dying in the wild,” said lead investigator Paul Krushelnycky, an entomologist in CTAHR’s Department of Plant and Environmental Protection Sciences. “The study helped us better understand what is likely driving the spatial pattern of mortality in the wild population. This is important for coming up with the most effective strategy to ensure the plant’s continued survival.”

The Haleakalā silversword lives only on the slopes of this volcano. Besides its rarity and dramatic appearance, it also plays a critical ecological role in its alpine desert environment, including acting as the habitat for several species of endemic insects. Beyond that, it’s a good indicator of what’s happening throughout the world as plants and animals are impacted by higher temperatures and changing rainfall patterns.