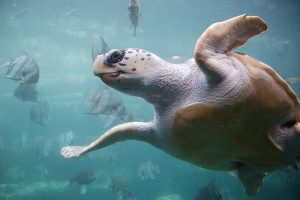 Sea level rise and hurricanes are a threat to sea turtle nesting habitat along national seashores in the Southeast, but a new study predicts the greatest impact to turtles will be at Canaveral National Seashore.

The University of Central Florida-led study, which was published recently in the journal Ecological Applications, examined loggerhead and green sea turtle nests to predict the amount of beach habitat loss at Canaveral, Cumberland Island, Cape Lookout, and Cape Hatteras national seashores by the year 2100. Sea turtles help maintain the coastal ecosystem and are indicators for the health of sandy beaches.

When comparing sea turtle nesting density with predicted beach loss at the sites, they found nesting habitat loss would not be equal. The researchers predicted that by 2100, Canaveral would lose about 1 percent of its loggerhead habitat, while the three other seashores will lose between approximately 2.5 to 6.7 percent each. Although Canaveral’s percentage loss is smaller, the impact at this national seashore will be greater because of its nesting density.

“Canaveral is part of the core loggerhead nesting area for the Southeast,” says Marta Lyons, a preeminent postdoctoral fellow in UCF’s Department of Biology and the study’s lead author. “The nests are already pretty well packed in there, so even a small loss of area can have a big impact on nesting sea turtle populations.”