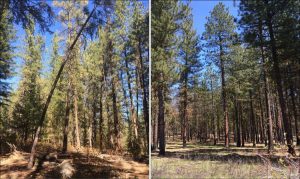 A forest site in north central Washington that has had no known thinning or burning treatments. Right: A forest site that was previously thinned and burned. Large, fire-resistant ponderosa pine trees dominate this area, with very little flammable ground debris such as shrubs, grasses and downed wood.Photo Credit: Susan Prichard/University of Washington

The 2014 Carlton Complex wildfire in north central Washington was the largest contiguous fire in state history. In just a single day, flames spread over 160,000 acres of forest and rangeland and ultimately burned more than 250,000 acres in the midst of a particularly hot, dry summer.

The wildfire, driven by strong winds and explosive growth, was unprecedented in how it burned the landscape, destroying more than 300 homes in Washington’s Methow Valley. But “megafires” like the Carlton Complex are becoming more common in western U.S. forests as the climate warms and forests are crowded with trees after years of fire exclusion.

In the first major study following the devastating Carlton Complex fire, researchers from the University of Washington and U.S. Forest Service found that previous tree thinning and prescribed burns helped forests survive the fire. The study, published Feb. 22 in the journal Ecological Applications, shows that even in extreme wildfires, reducing built-up fuels such as small trees and shrubs pays off.

“Our study suggests that the fuel treatments were worth the investment, yielding a more desirable post-fire outcome than if they hadn’t been implemented,” said lead author Susan Prichard, a research scientist at the UW School of Environmental and Forest Sciences. “There are a lot of benefits to creating more resilient landscapes, and this study suggests that even in the worst-case scenario wildfires, it can be worth it.”

On July 17, 2014, sustained winds of 35 mph raced through the Methow Valley, blasting oxygen into several fires that had started earlier that week. Before long, the fires joined and spread. A column of smoke stretched 30,000 feet high, dropping embers and igniting dry grasses, trees and other fuels on the ground over thousands of acres.

Propelled by the fast-moving column of smoke and wind, the flames traveled all the way to the Columbia River.

“It was the kind of fire that even experts who have studied them for decades had not seen before,” said Prichard, who lives in the Methow Valley. “It was a devastating fire for our community. I truly thought people would be killed by that fire, and it still feels miraculous that everyone survived.”

In the aftermath, Prichard and collaborators wondered if actions such as controlled burns and thinning were helpful in the case of a megafire like the Carlton Complex. State and federal agencies sink ample resources into these efforts to increase the resiliency of forests to wildfires by removing small- and medium-sized trees, leaving larger, mature trees that are more likely to survive future drought and wildfires.