Not falling far from the tree: Ecologists study seed-to-seedling transition 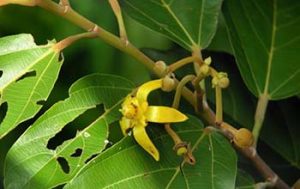 Why are there so many species of plants? Why do some plants thrive, while others don’t?

Ecologist Noelle Beckman of Utah State University and her colleagues explore these questions in new findings about seed-to-seedling transitions published in the journal Ecology.

The research is supported by the National Science Foundation. “This team used a new approach to analyzing spatial distributions of seeds and two stages of seedlings for a better understanding of the understory recruitment of plants,” says Betsy von Holle, a program director in NSF’s Division of Environmental Biology.

The scientists studied the characteristics of 24 tree species growing on Barro Colorado Island in Gatun Lake in the Panama Canal.

“Patterns of seed dispersal and seed mortality influence the spatial structure of plant populations and the local coexistence of competing species,” says Beckman. “Most seeds are dispersed close to the parent tree, where mortality is also expected to be highest due to competition with siblings or the attraction of natural enemies.”

One explanation suggests that herbivores, pathogens and other natural enemies make areas near a parent tree inhospitable for seedling survival, resulting in more regular spacing of plants. “This mechanism can allow species to coexist,” Beckman says.

Read the article in Ecology: https://esajournals.onlinelibrary.wiley.com/doi/abs/10.1002/ecy.2926