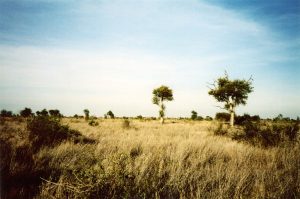 The researchers, including Deron Burkepile, studied resiliency mechanisms of ecosystems in response to climate extremes, which are predicted to occur with greater regularity and intensity. They examined the consequences of a significant drought between 2015 and 2016 in southern Africa. / Courtesy of Wikimedia Commons

Deron Burkepile, a professor in UC Santa Barbara’s Department of Ecology, Evolution and Marine Biology has been working in southern Africa for longer than a decade, monitoring the complex and diverse plant communities which populate the region.

Burkepile first began doing field work in Kruger National Park, South Africa about 15 years ago, working with other researchers in order to better understand the relationship between large herbivores and the plant communities that host them, as well as how these interactions could be influenced by a third variable: fire.

In a paper published in the journal Ecology, Burkepile and his collaborators describe the striking ability of an ecosystem to recover after periods of severe drought and how the differing frequencies of fire affect the manner in which plant communities respond to drought.

“Fire is one of the other big structuring forces of plant communities,” Burkepile described. “We set up this experiment where we put up herbivore closures, big fences to keep them out of certain areas of the savanna. Then we set up the enclosures in areas that have been manipulated with different fire return times.”

Read the article in Ecology: https://esajournals.onlinelibrary.wiley.com/doi/abs/10.1002/ecy.2983