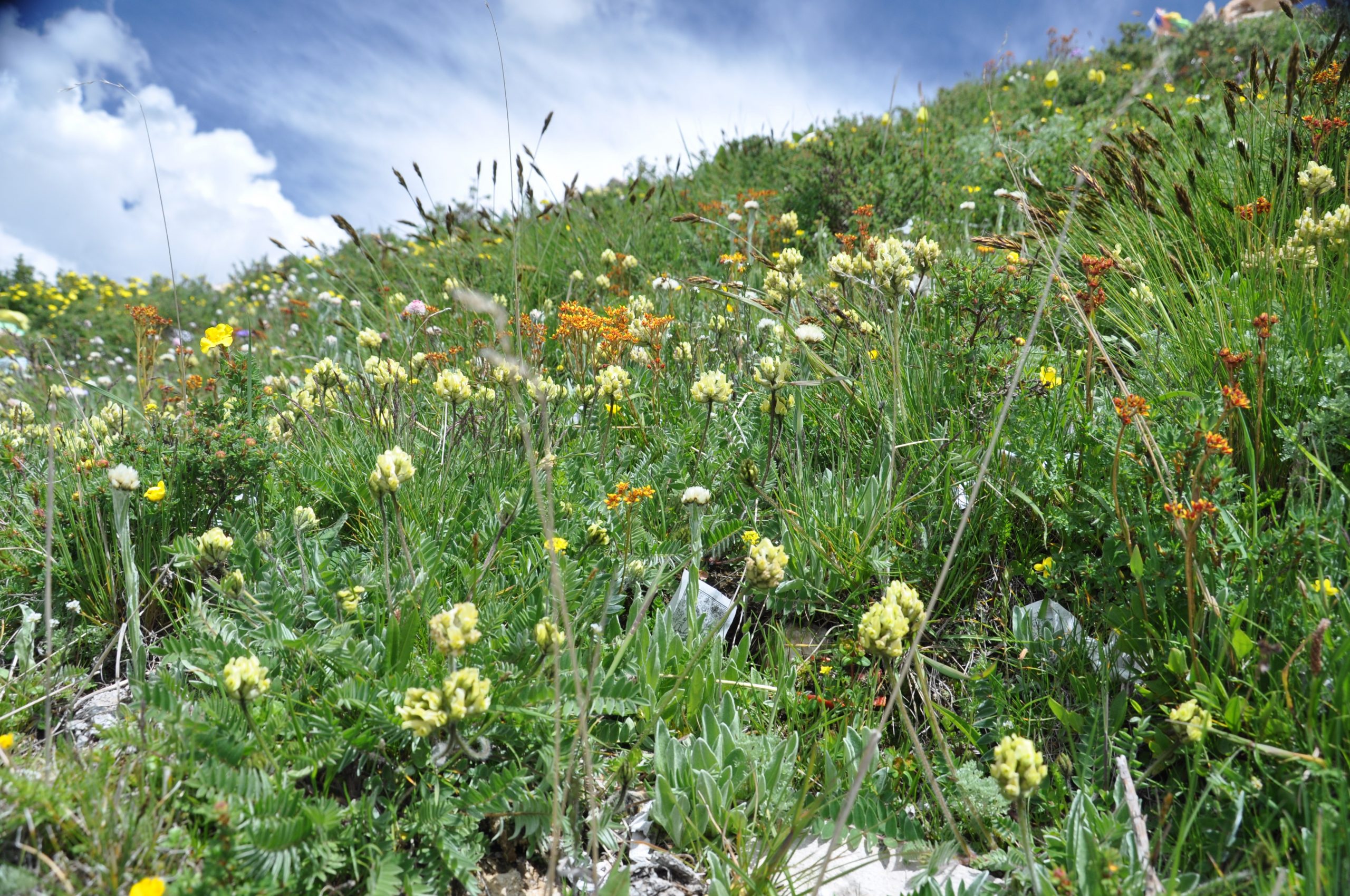 Climate resilience of plants like these wildflowers of the Tibetan Plateau could depend on soil seed bank health. Photo courtesy of Scott Collins.

Seeds offer a level of resilience to the harmful effects of climate change in ecosystems across the globe. When seeds are dropped into the soil, often becoming dormant for many years until they are ready to grow into plants, they become part of the natural storage of seeds in “soil seed banks.” These banks have been thought to better withstand extreme conditions than can the sprouted vegetation that exists above-ground.

A new study published in the Ecological Society of America’s journal Ecological Applications examines how warming and increased precipitation (rain and snow) harms the seeds in the ground of the Tibetan Plateau and elsewhere.

“Soil seed banks are essentially the last resort of natural resilience in ecosystems,” says Scott Collins, professor at New Mexico University and an author on the paper. “Too often we focus on what we see above ground and base management decisions just on the appearance of the plant community.”

The Tibetan Plateau, a place that has been grazed for thousands of years, is an ideal place to study direct and indirect climate effects on vegetation in a fragile environment. The study states that as the highest plateau in the world, averaging over 12,000 feet (4000 meters) in elevation, it is regarded as the third pole of the Earth. The warming rate here is nearly 1.5 times that of global warming due to climate change and annual rainfall has increased in most areas of the plateau.

Because the growing season is relatively short on the plateau, the soil samples and the plant surveys were all collected in one year. Researchers from Lanzhou University in China visited 57 sample collection sites at different elevations and ecosystem types in the northeastern part of the plateau. They gathered 1026 soil samples and surveyed the aboveground plant community, which are composed of the grown plants that reflect the types of seeds dropped into the ground over time. Next, the researchers germinated the samples and grew them in experimental plots to study the growth and what different conditions affect the soil seed banks of Tibet. 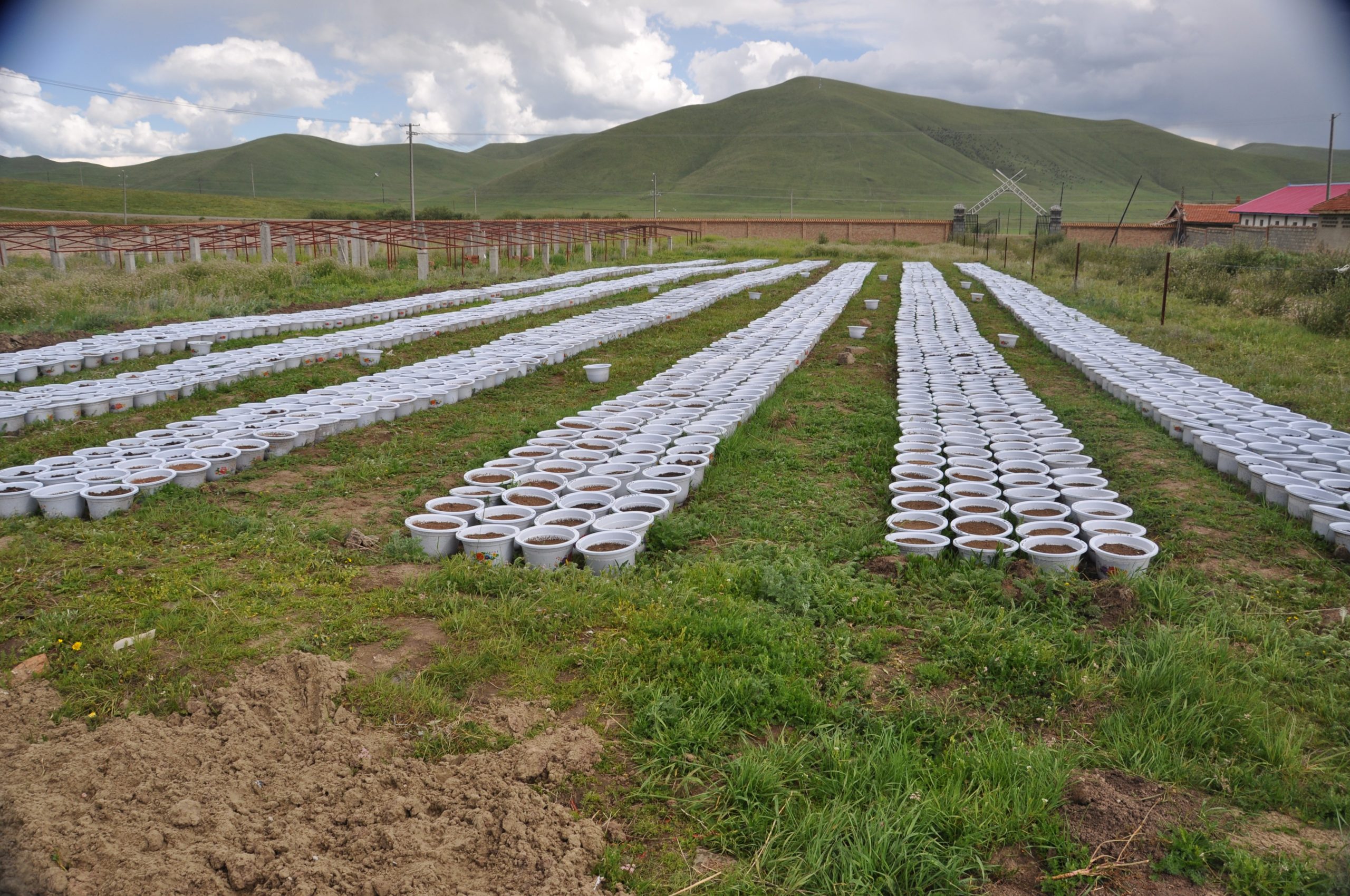 A soil seed bank germination experiment in the field consists of collected soil samples which are spread on pots of sand. As seeds germinate, lead author Miaojun Ma counts and identifies the seedlings. Photo courtesy of Scott Collins and Miaojun Ma.

While some plants appear to grow well under increasing precipitation and warming, these changes have different, harmful effects on the little seeds that lay dormant and resilient in the soil.

“Climate change effects the ability of seeds to germinate, grow and survive,” says Collins. “Although climate change affects adult plants, seedlings are delicate and stress from climate – drought, freezing, etc. – can cause high mortality of seedlings.”

The study states that temperature is a primary factor in controlling seed dormancy. With warmer temperatures, seeds may be triggered to sprout too early when conditions are not ideal for healthy growth. An abnormally warm spell of a few days – which is becoming more common – during an otherwise harsh winter can trigger those seeds to grow but ultimately make them fail. Many seeds might also be triggered to sprout too soon by higher moisture levels in the soil.

Increasing temperature and precipitation can also effect seeds indirectly, by changing the environment around them. Pathogens (microscopic disease-causing organisms) that are harmful to seeds can grow more prolific under warmer and wetter soil conditions. The acidity of the soil can also change, which strongly affects microbial communities and the abundance of those pathogens. Extra nitrogen in the soil, also brought on by changing conditions, allows some plant species to dominate others and leads to a decline in the overall species diversity, which translates to lower diversity of seeds in the ground.

Collins believes the study should compel ecosystem managers and scientists to pay attention to both the direct and indirect effects of global environmental change on belowground systems. “Even when the aboveground community seems badly degraded,” he says, “the soil seed bank may still provide an important but underappreciated source of ecosystem resilience following prolonged disturbance.”

With continued changing climate conditions, however, that resilience continues to be tested.