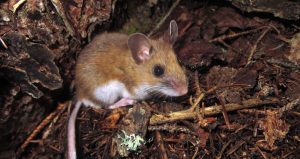 Generalist rodents such as this deer mouse disperse fungal spores at a time when many seeds are germinating. (Credit: UNH)

DURHAM, N.H.—Small mammals such as mice and chipmunks who are not picky eaters play a more important role than previously known in dispersing the spores of wild mushrooms and truffles, according to new research from the New Hampshire Agricultural Experiment Station at the University of New Hampshire.

Mushrooms and truffles colonize the roots of plants and assist with water and nutrient uptake. They also play a fundamental role in helping reestablish plants following disturbances such as wildfires, volcanic eruptions and the retreat of melting glaciers.

The research was conducted by Ryan Stephens, a postdoctoral researcher, and Rebecca Rowe, associate professor of natural resources and the environment. More than 1,200 scat samples were collected from small mammals in the White Mountain National Forest and analyzed. The researchers found that rodent species that consume a wide variety of food items can be important dispersers of the spores produced in fruiting bodies such as mushrooms and truffles. They are especially effective when their population increases.

“When generalist rodent populations are on the rise, they can disperse more fungal spores than dietary specialists such as the southern red-backed vole that consume fungi as their main food source,” said Stephens. “Because they use a wide variety of habitats, they can also disperse spores to areas that dietary specialists rarely inhabit.”

Read the article in Ecology: https://esajournals.onlinelibrary.wiley.com/doi/abs/10.1002/ecy.2972