Forests bouncing back from beetles, but elk and deer slowing recovery 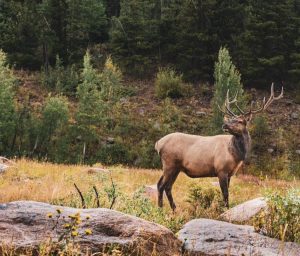 Two words, and a tiny little creature, strike fear in the hearts of many Colorado outdoor enthusiasts: bark beetle. But new research from CU Boulder reveals that even simultaneous bark beetle outbreaks are not a death sentence to the state’s beloved forests.

The study, published this month in the journal Ecology, found that high-elevation forests in the southern Rocky Mountains actually have a good chance of recovery, even after overlapping outbreaks with different kinds of beetles. One thing that is slowing their recovery down: Foraging elk and deer.

“This is actually a bright point, at least for the next several decades,” said Robert Andrus, lead author of the study and recent PhD graduate in physical geography. “Even though we had multiple bark beetle outbreaks, we found that 86 percent of the stands of trees that we surveyed are currently on a trajectory for recovery.”

Between 2005 and 2017, a severe outbreak of spruce bark beetles swept through more than 741,000 acres of high-elevation forest in the southern Rocky Mountains near Wolf Creek Pass—killing more than 90 percent of Engelmann spruce trees in many stands. At the same time, the western balsam bark beetle infested subalpine fir trees across almost 124,000 acres within the same area.

Read the article in Ecology: https://esajournals.onlinelibrary.wiley.com/doi/abs/10.1002/ecy.2998