The advantage of changing sex in fish population recovery

Humans eat a lot of fish, in some areas of the world making up an essential part of our diet. Fishing can sometimes deplete fish populations to the point where the fish have difficulty reproducing and growing their numbers again. Establishing Marine Protected Areas (MPAs) that limit or eliminate fishing within their borders can help fish to replenish their populations. They can then be harvested when they venture outside the MPA, spilling out into surrounding waters where fishers benefit from the recovered abundance.

Some fish species, however, recover their populations at different rates when fishing is eliminated inside MPAs. A new study in the Ecological Society of America’s journal Ecological Applications explores how sex-changing fish species can actually recover faster than fixed-sex species. 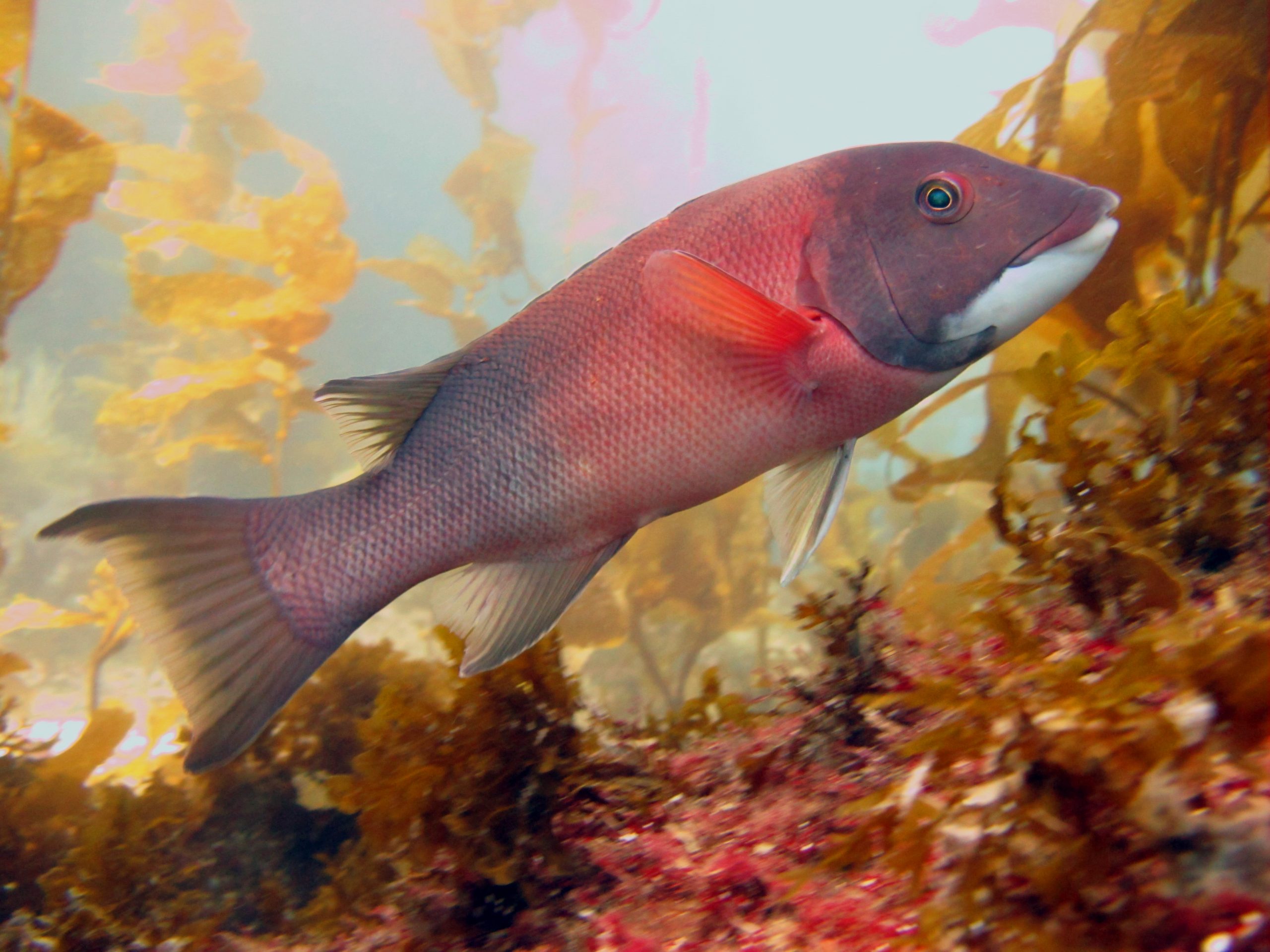 California sheephead can transition from female to male when a dominant male dies, and take over the mating territory. Photo courtesy of Scott Hamilton.

Most studies on population recovery within MPAs from overfishing have focused on fixed-sex species, where a female fish stays female its whole life and a male stays male: “I think this is because many MPA studies and many scientists assume that most fish species are single-sex,” says Scott Hamilton, Associate Professor at Moss Landing Marine Laboratories and San Jose State University and co-author on the study. But many important fishery species are not fixed-sex, and instead have female fish change to male at some point in their life.

Often, fisheries will only harvest fish over a certain size. Size-selective harvests will end up targeting and catching males because they are usually bigger, which then skews the population towards female. In species that can alter the sex ratio on their own by changing sex, how is their reproduction and long term population recovery affected by male harvesting?

Researchers used computer simulations to investigate how different sex-changing fish populations respond under MPA no-fishing implementation and also under unprotected conditions. They additionally looked at the “when” and “why” different species change sex to see if that has an effect on recovery as well.

Different sex-changing species can follow several rules or signals that prompt them to change sex. For instance, gag grouper change sex at a fixed size or age; once individual female reach a certain size, they transition. The California sheephead, however, follows different rules: large territorial males guard a mating territory of females and limit when those females change sex. In this scenario, only when a large male dies can a female fish transition to male and take over the territory.

In the researchers’ simulations involving these different kinds of sex-changing species, it appears the length of time for population recovery heavily depends on the degree to which abundant males are needed for reproduction, or the “mating function.” 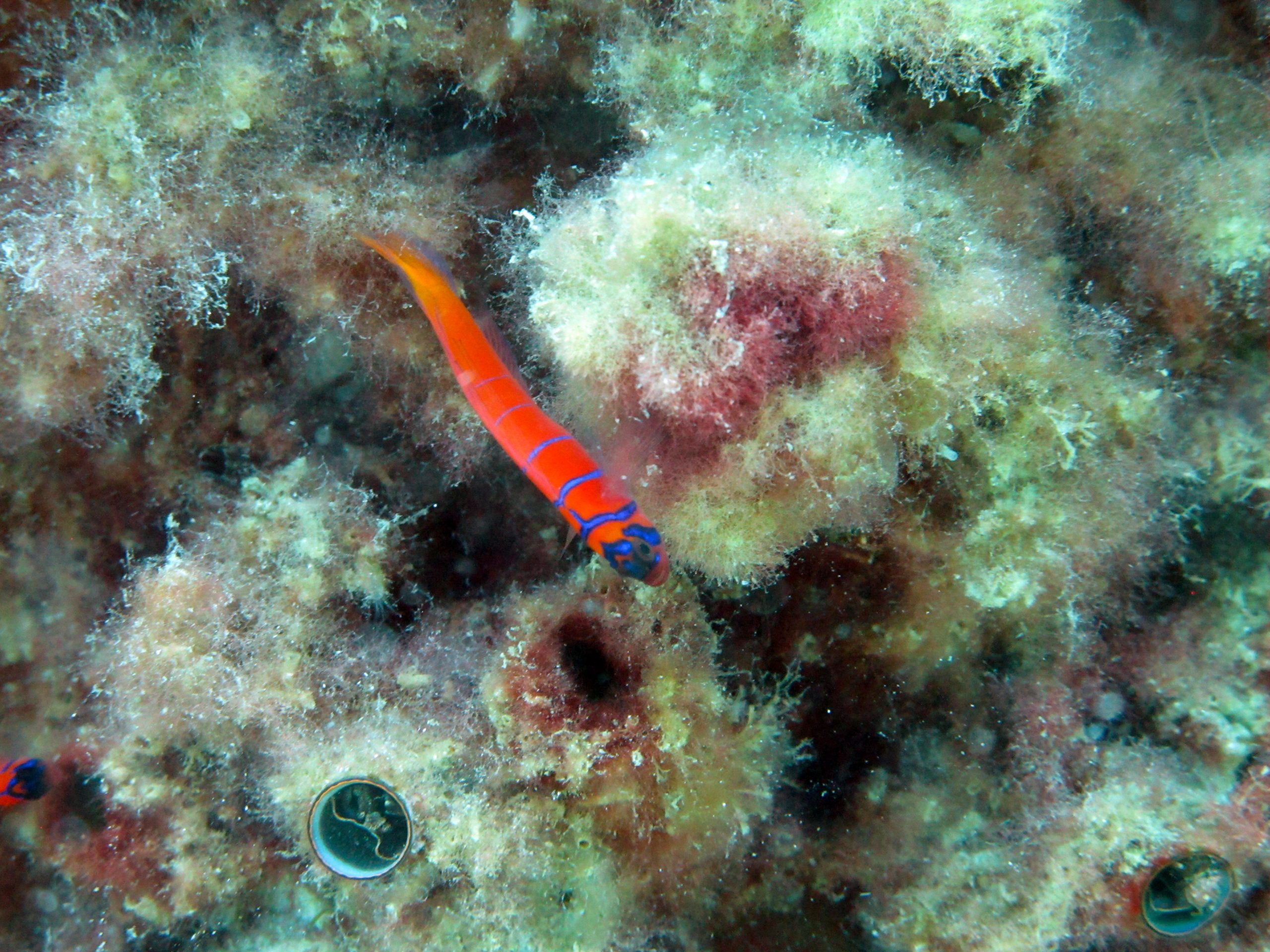 The mating function for blue banded goby like this one is pair spawning, where one male courts one female to fertilize and guard her eggs. Photo courtesy of Scott Hamilton.

For species like the gag grouper, a species that mates in large, group spawning events and changes sex only at a certain size or age, male harvesting is problematic. Not enough males are available to fertilize all the eggs produced by the females, and the females are not able to transition and replace the males until they grow big enough to do so. “In this case,” Hamilton explains, “our findings indicate that a sex-changing species will likely respond more slowly and unpredictably to MPA implementation than fixed-sex species.”

For species like the California sheephead, however, the female-skewed ratio created by harvesting actually works to their favor. When males are taken, a female transitions and takes his place in a territory. Because this species reproduces in a harem-like style in which one male mates with many females each day, these fish are not dependent on having abundant males to regrow their population.

It appears that as long as females readily replace males, and the reproduction rate remains high even with few males, a sex-changing species has an advantage in population recovery over a generic fixed-sex species. Conversely, a species in which many males are needed in their mating function, especially when females do not become male until they grow to a certain size, is at a disadvantage.

The good news is that the researchers expect most sex-changing species are of the first, harem-style type. “Unfortunately,” says Hamilton, “the mating functions are unknown for virtually all fishes, so much more empirical research is needed to better understand the shape of the mating function for more species, especially those that are targeted by fishing activities.”